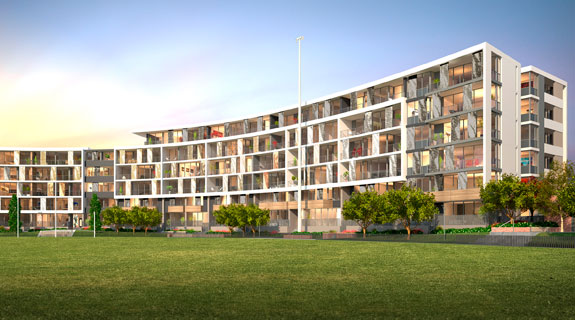 The next stage of LandCorp’s Claremont on the Park has been unveiled, with developer Mirvac Group launching sales for a luxury 142 apartment project today.

The six-storey building, The Grandstand, will include 37 one-bedroom, 80 two-bedroom and 19 three-bedroom apartments, while Mirvac will also build six terrace homes as part of the project.

Mirvac Group executive residential John Carfi said the design of the building, which will be located along the northern boundary of Claremont Oval, was inspired by the heritage of the site.

“We wanted to ensure that The Grandstand not only responded to Claremont Oval, but provided a luxury and sustainable living environment, maximising interaction with the oval and surrounding area,” Mr Carfi said.

The Mirvac project follows Georgiou starting construction last year on a 70-apartment development, The Pocket, also at the northern end of the oval.

Between 650 and 750 dwellings are planned to be built at Claremont on the Park, with around 500 being apartments.

More developers for the project are expected to be announced by LandCorp later this year.