Mirvac Group has cleared the way for development of its next high-rise apartment tower at Burswood after overcoming objections from local residents and the local council to its revised plans. 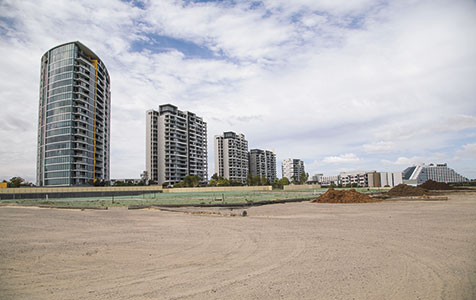 Mirvac Group has cleared the way for development of its next high-rise apartment tower at Burswood after overcoming objections from local residents and the local council to its revised plans.

The 23-storey tower will include mostly lower-cost one and two-bedroom apartments – a big shift from the more expensive apartment buildings it has previously developed at Burswood.

The shift to smaller apartments means the new tower will accommodate 179 apartments, up from 93 originally, without any increase in overall building scale.

It will also have 170 square metres of strata titled office space.

Mirvac did not proceed with its original plans because of “changed market conditions and the difficulty in selling similar unit types within Tower 4”, according to Town of Victoria Park council minutes.

“Mirvac contend that the increase in dwelling numbers is to provide greater variety in dwelling sizes/types, and to respond to current market demand and a broader market segment seeking smaller and more affordable one or two-bedroom accommodation,” the minutes read

Local residents lodged 57 public submissions when public comment on the new plans was sought. All objected to the proposal.

The Town of Victoria Park voted against the revised plans in December, but dropped its objections last month after Mirvac appealed to the State Administrative Tribunal.

Approval of the new Mirvac tower, to be built at the eastern end of the Burswood peninsula, is the second setback for residents of the precinct.

Last month, a group of residents tried unsuccessfully to challenge the approval of Crown Resorts’ planned six-star hotel, which they said would adversely affect their views and quality of life.

The Burswood Lakes precinct currently has 604 dwellings and its structure plan allows for a total of 1,250 dwellings.

However, Mirvac currently estimates the precinct will have a total of between 1,073 and 1,145 dwellings, according to Town of Victoria Park council minutes.

The planned Mirvac tower adds to several apartment projects under way in the broader area.

The Town’s Causeway precinct, located on the southern side of Great Eastern Highway, is earmarked for $900 million of apartment projects.

The first projects to gain approval are Riverwood (154 apartments) and C2 Property Group’s HawthorneGreen (146 apartments), which are currently being marketed.

A third area in the early stages of development is the Burswood Station East precinct.

DevWest  Group kicked off redevelopment of this industrial area with its recently completed Origin apartments, while Blackburne Property Group is marketing the Fusion apartments.

The Burswood Station East precinct is adjacent to LandCorp’s Springs Rivervale development, where eight apartments projects are currently being built or about to start construction.