Minnows and majors feel the heat

Psst … looking for a bargain? Here’s a way to buy $1 for less than $1 by acquiring a fistful of shares in Mt Gibson Iron. 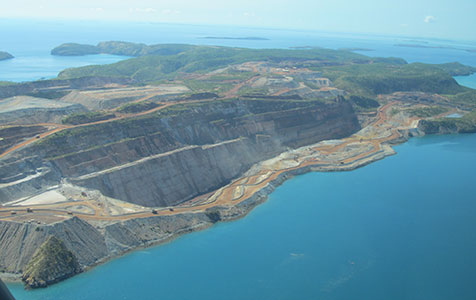 Psst … looking for a bargain? Here’s a way to buy $1 for less than $1 by acquiring a fistful of shares in Mount Gibson Iron.

Once a darling of the Western Australian iron ore industry, Mt Gibson’s stock market value this morning dipped below its cash backing.

The slide occurred when Mt Gibson shares dropped below 42 cents and you could buy the business for around $455 million (and gain access to $465 million in cash), which is how much Mt Gibson said it had in the bank and on term deposit at September 30.

The catch, which smart investors will have spotted, is whether Mt Gibson has retained all of that $465 million over the past five weeks because it has been a very tough time for all iron ore miners, especially Mt Gibson, which has suffered a pit wall problem at its Koolan Island mine.

Instability in the wall has caused a temporary halt to mining on the island and the potential delay of four shipments, though management is confident of hitting the company’s full-year guidance of annual output of between 6.6 million tonnes and 7mt.

Mt Gibson is not alone in feeling the chill winds of an iron ore price that has dipped below $US80 a tonne, and is said by commodity traders for a period below $US70/t.

Last night’s fall in the value of the Australian dollar to around US85.7 cents will help all exporters selling in US dollars; but with the world’s steel mills sagging under a glut of iron ore, and with the world’s four biggest producers promising to put more into the market, it is unlikely that the currency effect will prevent severe damage being done to small and high-cost miners.

While the cause of what’s happening in iron ore is well understood, and is annoying everyone not working for Rio Tinto, BHP Billiton, Vale or Fortescue Metals Group, the effects are less well understood – though they will be soon enough.

Other, bigger companies are under enormous pressure, as can be seen in Mt Gibson share price fall below cash backing.

Atlas Iron is another local favourite facing tough times, despite a concerted effort by management to drive down production costs in order to keep one-step ahead of the falling price a competition, which has investors watching closely.

As at this morning, the value of Atlas on the stock market had fallen to $227 million, just $22 million more than the company’s $205 million cash in the back. If Atlas sheds a further 2 cents it will join Mt Gibson in the dubious category of trading at less than cash backing.

BC Iron, the company that merged recently with Iron Ore Holdings, isn’t far behind in the dollar-for-dollar stakes. As at this morning it was being valued at $163 million, with cash in the bank of around $135 million after adding together the September 30 cash balances of both companies.

When viewed collectively there is now a deeply disturbing picture of the three iron ore companies (Mt Gibson, Atlas and BC) being valued at $845 million while between them they have $805 million of cash in the bank – which means all of their mining operations are theoretically worth $40 million.

Sobering as the numbers are at the bottom end of the iron ore market there could soon be even more interesting events at the top end, where the big four seem determined to crush everyone standing in their way.

Not only is a strategy of killing opposition unpleasant, it is not very wise because sovereign governments, the ultimate owners of resources in the ground, tend to frown on corporate activity that stifles development projects.

In WA it has been the premier, Colin Barnett, who has objected. And while he is unlikely to do anything rash, that might not be the case in countries such as Guinea, where Rio Tinto says it is planning a mine at Simandou.

Another question is whether the man Rio Tinto had kicked off the Simandou claim, Israel’s mercurial billionaire Benny Steinmetz, will do something to stir the government of Guinea into reconsidering its deal with Rio Tinto because of a possible go-slow on the project.

Hints were detected this week that consultants working for Mr Steinmetz are starting to stir the Simandou pot by pointing out that Rio Tinto could be ‘warehousing’ the project in Guinea for development much further in the future than has officially been announced.

If that’s the case, the government of Guinea will not be amused and Rio Tinto could find itself the next company given its marching orders from a sad, impoverished and appallingly corrupt country.