The resources sector is often beaten up by its critics, occasionally with good reason, but it has many achievements worth celebrating. 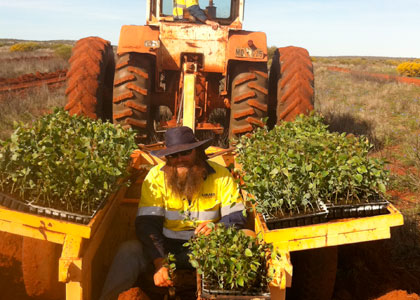 PLANTING SEEDS: The spin-off benefits from the giant Karara iron ore project include a forestry project in the Mid West.

The resources sector is often beaten up by its critics, occasionally with good reason, but it has many achievements worth celebrating.

WHEN most people think about the impact large resources projects have on farming communities, I suspect the immediate thoughts are negative.

All of these issues are real in various parts of Australia, particularly where very large construction projects have put a strain on local infrastructure.

It is no surprise that those who have lived in quiet rural communities for many years find it confronting when their life is affected.

The criticism was encapsulated very sharply by one phrase, ‘cancer of the bush’, which was used by independent federal MP Tony Windsor as the title of his parliamentary report on FIFO work practices.

Mr Windsor was in Perth last week for a series of seminars discussing his FIFO report, and he made a point of explaining that the lull title of his report was actually ‘Cancer of the Bush or Salvation for our Cities’.

Speaking at a UWA Extension seminar that I attended, Mr Windsor also acknowledged that conditions vary enormously across different regions.

He seemed to hold particular concern over the impact of resources projects and FIFO work practices on the established farming communities of NSW and Queensland, where the very large investment in coal-seam gas developments has caused considerable disquiet.

Similar concerns have been expressed in this state’s MidWest, but on a much lower scale, and it would appear with much less basis in fact.

In that region, it has been fascinating to learn about some of the positives that have flowed from large resources projects, notably the $3 billion Karara iron ore development.

The headline numbers for this project are very impressive. It has achieved 91 per cent Australian content — that is, 91 per cent of the total spend during its development has gone to Australian suppliers.

This would be as good as any other big project developed in recent years, and better than most.

The story gets more impressive after digging into the granular detail.

I particularly enjoyed hearing about local farmers who were contracted to haul ore at a time when their core farming business was hit by drought conditions; or the farming and forestry projects that Karara has sponsored, via its purchase of a nearby farm: or the growth in the population of the shire of Perenjori - up from 528 people in 2006 to 904 at the time of the last census.

This is the kind of region that has been suffering a slow, and most would have thought inexorable, decline.

Karara seems to have changed that, and with the iron ore mine having an expected life of 30 years or more, the local community can expect sustained benefits.

In light of this, it was interesting to note that the most commonly cited example discussed at last week’s FIFO seminar was Ravensthorpe.

It is the prime example of spectacular failure, where many people moved to Ravensthorpe and invested in the region on the back of BHP Billiton’s giant nickel project.

Its closure after just a few months has left scars, and is firmly imprinted on many memories.

The recent closure of Galaxy Resources much smaller spodumene mine at Ravensthorpe has probably added some concern, and tends to obscure the quiet achievements of First Quantum, which bought the BHP project and resumed production after a major re-engineering exercise and large reduction in staffing.

I was reminded of a small but even more fascinating example at the FIFO seminar.

It concerned the timber town Manjimup. After the major timber mill in the town was shut down a few years ago, Rio Tinto moved in swiftly, ran a jobs forum, and hired about 30 locals for FIFO work in the Pilbara. That created a lifeline for those workers, who were able to stay in Manjimup with their families and established c ommunity.

Sometimes it’s the really small but very personal, examples that resonate with the public at large.