Providence can mean different things in the resources industry, but to a junior miner looking for a start-up project, it can be a very important first step on the ladder to success. 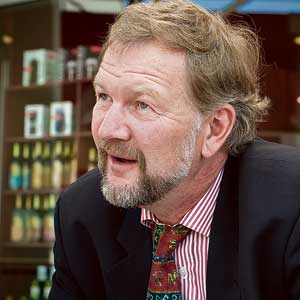 TARGET: Chris Sangster\'s Scotgold Resources is aiming to start production at the Cononish deposit by 2010.

Providence can mean different things in the resources industry, but to a junior miner looking for a start-up project, it can be a very important first step on the ladder to success.

So when Chris Sangster saw an opportunity in the Scottish Highlands last year, he jumped at it.

Cononish is in the Dalradian super group, a sequence of rocks 500-700 million years old extending from North America, through Northern Ireland and Scotland to Sweden and Norway.

"This defined deposit in the Loch Lomond and Trossach National Park was effectively lying dormant and it provided us with an exceptional opportunity," Mr Sangster said while in Perth last week.

"For a junior miner, it was a rare opportunity. We couldn't have found the same in Australia.

"We were well-positioned because I had worked on the deposit before as a consultant. I knew it was available.

"We bought the deposit from a Swiss-based consortium in May, 2007."

Mr Sangster said 2010 was the earliest production could start, but this depended on the test drilling results.

Scotgold was listed on the Australian Securities Exchange on January 15 2008. Initially the plan was to seek a London listing but, according to Mr Sangster, "the money we wanted to raise was too little for their radar screen".

He said Scotgold Resources raised $A4.9 million gross in January, which would allow it to progress the deposit towards a production decision.

Scotgold, the only Australian miner operating in Scotland, has just completed a client resource statement on Cononish, which is a small vein gold deposit with some silver.

"We hope to have the diamond drilling rig, which arrived from Ireland in mid-August, at the drilling site on September 4 or 5," Mr Sangster said.

"Within two kilometres of the mine we have the potential to double or triple the existing resource, taking it up to half a million ounces of gold.

Revenue from silver extracted from Cononish is expected to contribute an additional 5 per cent.

Baseline studies at Cononish were carried out about 10 years ago and will be updated next year.

Mr Sangster said Scotland was a good place to do business, with good infrastructure and environmental approval processes.

"The policies in which we are operating don't change every week, as they do in some other countries," he said.

"We have a very good relationship with the planning authority, and we are not odds with the aims of the park.

Mr Sangster said Scotgold would carry out concurrent rehabilitation as work progressed in the underground mine. The only visible signs of mining would be the tailings dam.

Scotgold is considering modular plant equipment designed in Australia to work along the seam.

The tunnel will be in the side of the hill with most of what Scotgold plans to mine above the tunnel. After the initial exploration with the diamond drill, the company will adopt the traditional drill and blast technique when production starts.

The Cononish CEO is something of an enigma. He heads a WA listed company, was born in England but claims Scottish ancestry through his Aberdeen-based parents.

He now lives at Comrie, 25 kilometres east of the site and visits Australia two or three times a year.