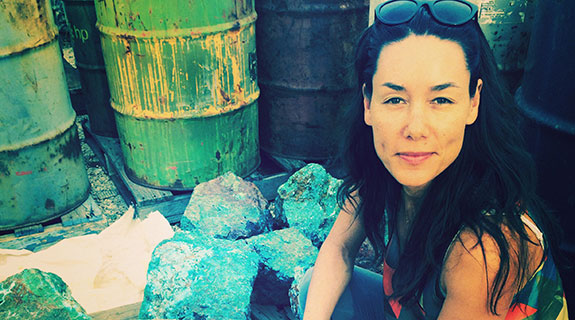 A Perth jeweller has used the launch of her first men’s collection to call on the mining industry to open its production lines to Western Australia’s creative community.

Siobhan Way, whose jewellery is worn by several well-known Australians including Foreign Minister Julie Bishop and supermodel Megan Gale, told Business News she believed giving artists access to stones and materials that miners were digging up, but were not primarily interested in, could be beneficial to all parties.

“We have an incredible creative pool (of) talent in WA and it would be lovely to see mining companies coming together with creatives,” Ms Way said.

“I’m not saying it’s not happening, because it is. I know that Rio Tinto and BHP Billiton and some of the big miners are incredibly generous in sponsoring creative talent in WA, but to actually see some of their product being used or to see what else is coming out of the ground when they’re mining I think would be fascinating.”

Ms Way, who has sourced Australian stones such as hematite from the Pilbara, pyrite from Kalgoorlie, black jade from South Australia, and fossil wood from Queensland for her new Lithos men’s collection, said she believed she was missing out on materials available only from miners.

“I’m really interested to see what’s coming out of the ground in some of the larger mines. For example with nickel mining there’s a lot of a gemstone called chrysoprase, it’s a beautiful green material,” she said.

It’s understood a few male executives in WA’s mining sector have already bought some cufflinks from Ms Way’s new collection, which are priced between $380 and $680 a pair.