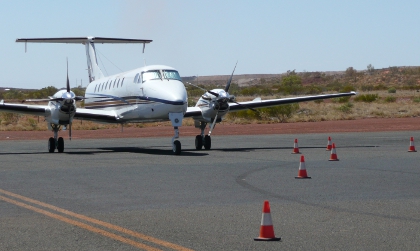 The mining industry says fly-in fly-out work practices ensure the resources sector is supplied with the right skill sets necessary for expansion, and has tipped a further increase in the practice, on the same day of a federal inquiry into the social impacts of FIFO on regional areas.

The Association of Mining and Exploration Companies said at the inquiry that FIFO work was essential to meet ongoing demand for workers in the resources sector.

The Regional Australia Committee is holding its second day of hearings regarding the impacts of FIFO workforce practices on children and young people in Perth today.

"AMEC and our members support FIFO as a legitimate workforce strategy which provides an adaptive management capacity to meet industry demand and the differing needs of the workforce," AMEC national policy manager Graham Short said.

"A FIFO workforce may be the only viable option ... particularly with the current constrained workforce conditions.

"There are a number of factors which influence workforce strategies, such as the cyclical nature of the industry, mine location, mine life cycle, the skills required and the transient nature of the workforce.

"FIFO has not only been successful in meeting hte immediate needs of employers for construction and production purposes, but it also provides workers with a choice.

The CME report focuses on the benefits companies can deliver to regional communities through FIFO, how to apply best practices in FIFO integration and details current practices.

CME chief executive Reg Howard Smith said FIFO was about providing choice and flexibility for workers, which was increasingly important in a competitive labour market.

“Attraction and retention of employees would be severely impacted if companies attempted to force residential employment on their employees,” he said.

“Further, if FIFO was highly restricted or residential employment mandated, local communities and government would experience severe pressures on infrastructure and services, while at the same time, valuable resource projects would not find a skilled local workforce and may not even proceed.”

Mr Howard-Smith said the reality was that FIFO practices would continue to increase as construction of resources projects ramps up.

Australian Medical Association WA president David Mountain told the hearing into FIFO practices in Perth that a dearth of healthcare workers - who faced the same isolation and cost-of-living pressures as others in remote mining communities - was compounding the problem.

"Given the fact it's incredibly hard to attract people to regional and remote Western Australia already, losing any further (medical) workforce in those centres would be catastrophic," Dr Mountain told the House of Representatives committee hearing, chaired by independent MP Tony Windsor.

The AMA said in an earlier statement that more than 80 per cent of 290 doctors surveyed wanted mining and resource companies to contribute more to health care in local communities - directly or through increased taxes - as they were having an inflationary effect on health and other services.

"The fly-in, fly-out federal parliamentary inquiry should seriously consider how mining companies can make a special contribution to health services in rural and remote areas," the association said in its statement.

Dr Mountain told the hearing that boredom and stress often led to risk-taking behaviour and excessive drug and alcohol abuse when FIFO workers returned home, while their partners were left as "basically single parents" each time they went back to work on long shifts.

"Often they are single parents who then have to deal with a partner who comes down and wants to party hard for the week that they're down," he said.

"They have to pick up the pieces again."

"Almost universally, people have noticed that FIFO workers have increased levels of mental stress and mental illnesses ... quite significant increases in alcohol and other drugs ... significant rates of familial disharmony - relationship breakdowns - and significant rates of high-risk behaviour," Dr Mountain told the hearing.

Rates of sexually transmitted disease among FIFO workers and in some small communities where they were based were at "epidemic proportions".

"It's very common that you're dealing with people who have caught something while they've been away in Southeast Asia," Dr Mountain said.

Another health issue unique to FIFO families was the unusually high rate of induced births to fit in with rosters that could see partners away for weeks at a a time.

"With the number of FIFO workers continuing to increase strongly, the impacts they are having on health services across the state are enormous," he said.

"These impacts are felt most severely by smaller remote towns and communities that already struggle to provide and maintain health and other services."

But even medical practitioners were impacted by rising costs and runaway real estate prices that were making it unviable in some cases to stay in mining towns.

Dr Mountain said it was becoming increasingly more common for doctors themselves to adopt the FIFO model of being based in a major city and flying to remote communities.