The impact of falling export prices has been revealed in Canberra's Mid-Year Economic and Fiscal Outlook, as the federal government pushes the return to surplus out until the end of the decade. 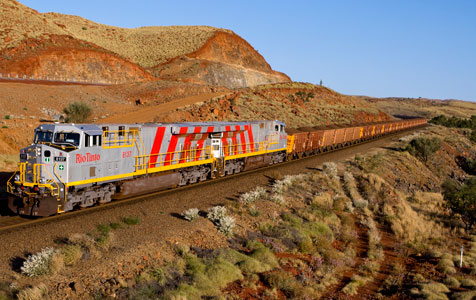 FALLING STAR: Iron ore prices are down and staying down.

The impact of falling export prices has been revealed in Canberra's Mid-Year Economic and Fiscal Outlook, as the federal government pushes the return to surplus out until the end of the decade.

The latest sensitivity modelling shows the economic effect of the fall in the terms of trade, which represents the relationship between the prices of the nation’s imports and exports.

A 4 per cent fall in the terms of trade will hit employment by a quarter of a per cent and company profits by 3 per cent, assuming a constant exchange rate, Treasury said.

That modelling is not far off the economy’s actual performance in the September quarter, when the terms of trade fell 3.5 per cent in seasonally adjusted terms.

The impact snowballs over time, cutting real GDP growth by a quarter of a per cent in 2015-16, and employment by 0.5 per cent.

Unemployment is now expected to peak at 6.5 per cent.

Wages, which are generally unlikely to fall in the short term, would be 0.25 per cent below the baseline prediction, the budget papers said.

The fall in employment, wages and company profits caused by the lower terms of trade is, in reality, affecting the government’s tax receipts, which have been revised downward by $31.8 billion across the forward estimates.

Lower than expected income tax is responsible for a $2.3 billion fall in revenue this year, and $8.6 billion of the reduction over the forward estimates.

Company tax, which Treasurer Joe Hockey said had been driven down mostly by falling iron ore prices, will be $2.3 billion lower than initially projected this year and $14.4 billion less across the forward estimates.

Iron ore is the nation’s leading export, with more than 40 per cent of the world’s seaborne iron ore produced in the Pilbara.

Some relief will come in the form of the depreciating exchange rate, but it won’t be enough to balance out the fall in iron ore and other commodity prices.

The Western Australian government will also take a major budget hit from the price fall, but that impact will largely be through the mechanism of lower royalty revenue.

HSBC chief economist Paul Bloxham said the government had chosen to absorb the impact of lower revenues into its budget bottom line.

“Abstracting from a one-off top up that the government made to the RBA balance sheet last year, the budget deficit is now roughly unchanged from 2013-14,” he said.

“The mid-year update shows the budget absorbing the shock of weaker revenues, rather than tightening policy.”

The review also highlights a mixed performance for the government in efforts to reduce debt, projecting a $170 billion improvement in the gross position in 2023-24.

On the expenditure side of the ledger, improvement has been driven by the repeal of the mining tax and associated savings measures.

The impact of the repeal through the forward estimates is $10 billion, but over the decade to 2023-24 it is around $50 billion.

The government is now predicting a return to surplus in 2019-20, meaning the nation will endure a decade of continuous deficits.

The projected gross debt level for 2024 is now close to half a trillion dollars.