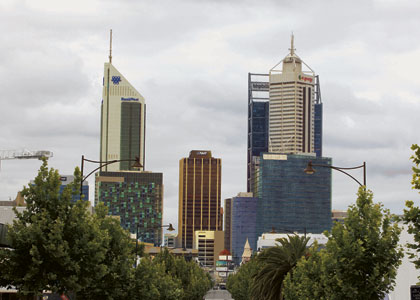 GOING UP: The completion of buildings such as Brookfield Place and Bankwest Place has opened up space in older towers like Central Park and the former BankWest Tower, now 108 St George Terrace. Photo: Annaliese Frank

THE slowdown in mining project development last year has affected the Perth office market, with the vacancy rate for CBD offices recording a modest increase to 5.7 per cent in January.

That is up from 4.2 per cent in July last year, but was still below all other state capitals.

“The increase was a little bit less than we thought it may have been,” Colliers International director of office leasing, David Cresp, said.

“It would still be the envy of most markets in the country.”

The West Perth market fared slightly better, with the vacancy rate in that sector increasing to 4.5 per cent from 3.3 per cent.

Mr Cresp said it was business as usual in West Perth.

A key measure of office market performance is net absorption.

The CBD figure was the weakest since the six months to July 2009, when fallout from the GFC started to batter the market.

The modest increase in the CBD vacancy rate was helped by the withdrawal of 17,347sqm of office space from the market during the six months to January.

This is understood to primarily be office space earmarked for refurbishment.

The withdrawals nearly matched the 21,981sqm of space that was added during the half year.

“Demand for office accommodation in Perth in the last six months was the weakest since 2009, however this was not surprising following record demand for office space since then,” he said.

Over the past three years the market has absorbed a very large increase in supply, led by the completion of the city’s largest office building, Brookfield Place, and Bankwest’s new headquarters on Murray Street.

Mr Lenzo said cost cutting by resources companies, particularly in the iron ore sector, was the main factor affecting the market towards the end of last year.

“This resulted in less demand for office space by firms providing professional services to the sector,” he said.

Mr Lenzo said all grades of office space experienced weaker demand; however premium grade offices showed the largest increase in vacancies - up from 1.3 per cent to 4.5 per cent.

This was attributed to the increased availability of sub-lease space, as companies such as BHP Billiton moved into Brookfield Place and Bankwest moved into its new headquarters.

Leasing agents say continued growth in the oil and gas sector has helped to fill available space, but this has been outweighed by reduced demand from engineering firms and others that had been working on iron ore projects.

The one segment that had positive net absorption was B-grade buildings, which may be a signal that local businesses are being more prudent with their spending.

The extra office space added to the market at the end of last year brought the total amount of new CBD office space in the past 12 months to 180,000sqm.

That lifted the total supply of CBD office space to about 1.6 million square metres.

Mr Cresp said while the market had started to pick up, with demand from engineers likely to lift, he expected a modest supply response.

“With the market where it’s at, it will really be a case of getting pre-commitments, usually 50 or 70 per cent, for any developments above 10,000 square metres,” he said.

The Property Council estimates the new supply pipeline will tighten significantly in 2013, with only 12,249sqm of new office space expected to come online in the CBD, mostly from refurbishments.

The volume of new stock is expected to gradually increase in 2014 and 2015, but will remain well short of recent growth.

The largest developments in the offing are Mirvac’s 30,000sqm office tower on the Old Treasury site, and Leighton Properties’ office buildings on the City Link site.

In West Perth, a further 15,237sqm is due to come online in 2013 but no other space is in the pipeline beyond then.

However there will be extra supply from the completion of buildings in near-city locations and in suburban markets.

The most notable is the expected completion this year of Charter Hall’s 28,000sqm WorkZone development, on the north side of the railway in Pier Street, Perth.

Leighton Contractors has committed to take 21,000sqm, but most of the balance is still available for lease.

In addition, Qube Property Group and the Carcione group have commenced construction of new office buildings in West Leederville.