Iron ore veteran George Jones says the next resources boom is being threatened by the proposed super profit tax as a group of fired-up mining executives today gathered to again express their anger at the Rudd government. 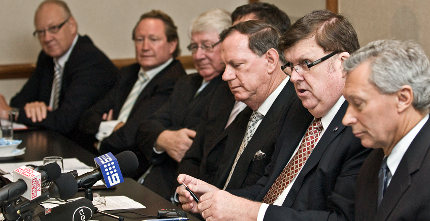 Iron ore veteran George Jones says the next resources boom is being threatened by the proposed super profit tax as a group of fired-up mining executives today gathered to again express their anger at the Rudd government.

Mr Jones was among 10 mining company chiefs who fronted the media in Perth this morning to maintain the industry's rage against the government's proposed 40 per cent tax on mining profits.

Mr Jones said the tax will affect the living standards of all Australians and is not just isolated to the mining sector.

"It raises the question of sovereign risk... Australia was founded on investment from foreign capital, initially from the UK, then Europe and then the States and other places," Mr Jones said.

"[The mining industry] is a fundamental asset that Australia needs to continue to grow and let us enjoy the lifestyles that we've got throughout Australia.

"The imposition of this tax on mining is, in my opinion, on the thin edge of the wedge.

It is the second gathering of mining executives in Perth in less than a week, with a smaller group coming together last week in response to the Rudd government's plan to announce a new mining tax.

Several days later, Prime Minister Kevin Rudd announced the proposed 40 per cent tax on the super profits of mining companies, a move that caused outroar from the industry and various lobby groups.

Mr Rudd today accused the mining companies of "crying wolf", saying the new tax would create a fairer system - with $1 in every $3 of mining profits returned to the Australian people through taxes, instead of $1 in $7 as it is now.

The group of mining executives all today agreed that the super profit tax was a move to nationalise Australia's most successful sector.

Mr Jones today said that many were only considering the tax's impact on the larger miners such as BHP Billiton and Rio Tinto, however there were about another 2,000 companies below them that would be in jeopardy.

"The last mining boom financed Australia, it paid off federal debt and we ended up with a future fund with close to a $100 billion in it, that balance sheet got us through the global financial crisis," he said.

"This resource boom, if it doesn't get throttled, has got the potential to get us back out of debt again and continue to provide a prosperous Australia."

"We wouldn't all be here if Canberra told the truth," he said.

Mr Forrest said that Fortescue, like most other mining companies with high capital cost projects, will be reviewing its portfolio in Australia.

Outspoken mining entrepreneur Michael Kiernan, who is on the boards of Swan Gold Mining and Matilda Zircon amongst others, said Indonesia was looking like a very attractive investment option, with that country's tax rate at around half to two-thirds less than that in Australia.

BC Iron managing director Mike Young said his company was now looking at overseas options and that the super profits tax could also cut into social programs that mining companies carried out.

A statement from the group is below:

The imposition of the super sized tax will have serious ramifications for investment in the sector, its international competitiveness and will directly affect Australian workers and their families. Canberra has sought to divide us from the Australian working family, that is exactly who we are and exactly who we employ, both directly and indirectly.

The investment reaction to the policy decision to date has been severe, wiping billions of dollars from the value of Australian mining companies, most of which are majority owned by Australian shareholders.

The Canadian Government is already openly stating that it expects to win investment dollars previously destined for Australian miners due to its comparatively lower tax regime.

This serves as a warning as to the damaging permanent impact of a further tax on resource profits.

The Australian resources sector relies for the majority of its major project finance on international markets. This high taxation rate is a deterrent to investment and financing which is likely to force investors to offshore companies and alternative markets, restricting the resource sector's ability to continue to drive Australia's economic recovery and on-going growth.

It is not only current producers, their shareholders and the communities in which they operate who will suffer. The structure of the tax means that the Federal Government has actively forced itself between companies developing new projects or planning expansions and their financiers - placing the payment of the tax ahead of interest repayments on debt financing.

With the existing credit squeeze on world markets and the significant cost of capital, the Federal Government's decision effectively increases the risk profile of Australian companies, and their Australian investors, which are seeking to establish new projects.

There are significant flaws in the design of the RSPT. For example, it does not allow companies to deduct interest or the costs of equity before the RSPT is applied. Those costs can have a huge impact on a company's bottom line.

The deduction of the 10 year bond rate will be approximately 6%. Mining projects are inherently risky and the total costs of funds for these projects are as high as 12%, and up to 20%, taking into account risk and term.

Any mining company that is only making the long term bond rate should stop and put their money into government bonds as their risk/reward profile is flawed.

The imposition of a 'super tax' on the minerals sectors sets a narrow revenue base to fund broad-based expenditure, which creates revenue sustainability issues for the Government. The cyclical nature of the mining sector, when combined with the brakes this super tax will place on growth, is likely to significantly reduce the revenue windfall to government over time.

Faced with this scenario there is significant risk that the government will be forced to examine other revenue collection bases in the future, such as the Banking or Financial Services industries.

The mining sector contributes billions of dollars annually to the Australian economy, to shareholders in our companies and to the communities in which we operate.

The industry is willing to - and does - pay its share to support Australia's economic growth. In fact, we have the opportunity to lead our country and region out of some of the most difficult financial conditions of recent times.

We now call on the Federal Government to allow us to do so and abandon its policy which can only impede the growth of the sector and its long term contribution to the economy, compromise the investments of thousands of Australians and drive investors to overseas markets.