Official data showing wages in WA taking a much bigger hit than any other state since COVID-19 may be nothing more than a statistical anomaly. 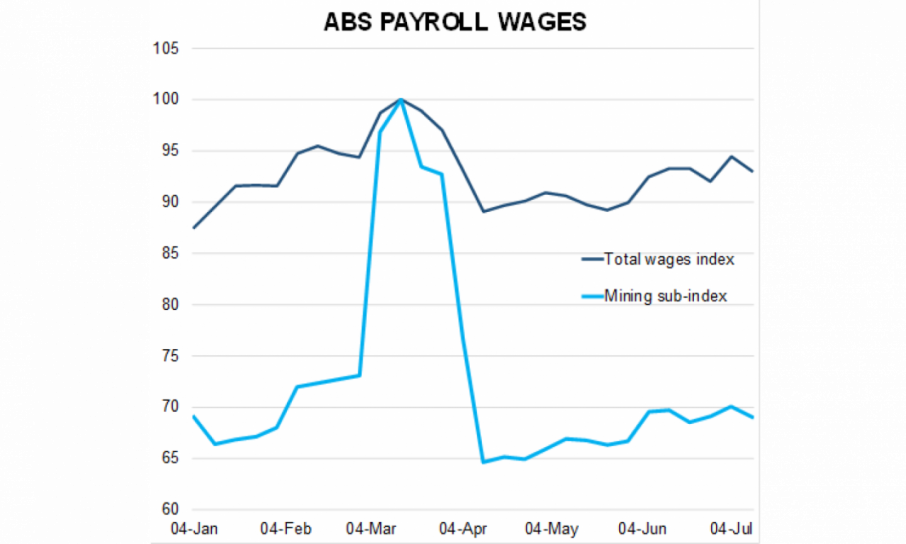 Total wage payments in WA have fallen by 7 per cent since March 14.

Official data showing wages in WA taking a much bigger hit than any other state since COVID-19 may be nothing more than a statistical anomaly.

Total wage payments in WA have fallen by 7 per cent since March 14, according to Australian Bureau of Statistics data released yesterday.

That is higher than any other state or territory and compares to the national fall of 4.8 per cent.

The biggest contributor to the decline was a massive 31 per cent plunge in ‘mining’ wages in WA, according to the ABS.

The ABS data is based on tax office single touch payroll data and is designed to give an early indication of movements in the labour market during COVID-19.

After digging into the ABS report, the state government has found that wages in mining (which includes the oil and gas sector) have not plunged after all.

Though, like any statistical analysis, it all depends on the time period.

“The 7 per cent fall in wages appear to be impacted by variations in the mining sector sub-index, which showed a spike in wages in mid-March,” a WA government spokesperson said.

“This may be due to bonuses paid to employees of mining firms with US parent companies in March (the end of their fiscal year).”

This is depicted in the graph, showing a spike in mining wages in March and a fall back to ‘normal’ levels soon after.

The spike happened to be around March 14 – that’s the date Australia recorded its 100th official COVID-19 case, and it has become the ‘reference’ date for subsequent analysis by the ABS.

A second factor is understood to be the shift to minimum staffing levels immediately after social distancing requirements were imposed.

Many companies in the mining and oil and gas sectors cut their operational staffing to minimum levels in late March and early April and also deferred maintenance work but have subsequently moved back towards normal staffing numbers.

Therefore, any changes in this sector may have a proportionally larger impact on the overall WA figures

“A further difference may relate to the impact of JobKeeper, which has been integrated into the payroll wages series,” the spokesperson said.

“Publicly available data suggests that WA’s share of JobKeeper has been lower relative to our population share.”

It showed 62 per cent of the jobs displaced in WA by late April had been recovered by July 11.

The data also showed WA has recorded the lowest decline in the number of jobs, down 3.1 per cent compared to a 5.6 per cent fall nationally, since March 14.

“Today’s ABS payroll jobs data is an encouraging sign that the jobs displaced due to the COVID-19 restrictions continue to be recovered,” Mr Wyatt said in a statement released yesterday.

“This is in line with other indicators such as job advertisements, which had almost returned to pre-COVID levels.

“Western Australia’s hard border has allowed the Western Australian economy to open up faster than any other State, allowing businesses to restart and people to get back to work sooner.”

Mr Wyatt noted that the ABS data incorporated the impact of the Phase 4 easing of restrictions on June 27.

He said that industries hardest hit by job losses, including accommodation and food services, and arts and recreation services, have improved significantly as restrictions have been eased.

However, in terms of wages, accommodation and food services continues to be the hardest hit sector in WA, with wages down by 13.6 per cent since March 14.