LAUNCHING a small business in a sector still in its infancy is a tough ask at the best of times, let alone in the midst of an economic downturn. 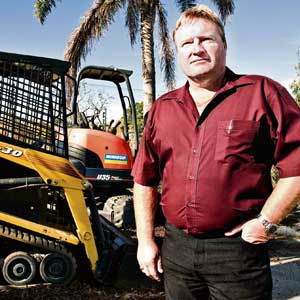 WORKING THROUGH: John Fenton says his business faces challenges in both boom times and in recession. Photo: Grant Currall

LAUNCHING a small business in a sector still in its infancy is a tough ask at the best of times, let alone in the midst of an economic downturn.

The challenges of securing adequate capital, establishing a customer base, and developing a credible brand could stop a good business idea before it even gets off the ground.

But success stories do exist.

As Mr Fenton will vouch, operating in the civil construction sector presents challenges for a company in boom times and in periods of recession.

When MiniQuip was established, the construction equipment hire industry was in its infancy, with few competitors in Western Australia. However, Mr Fenton's take-no-prisoners approach allowed the business to break through the entry barriers.

Struggling through the early years with the country in a downturn, Mr Fenton has since built a successful hire business with more than 20 employees and a fleet of 50 machines including bobcats, mini tip trucks, excavators and loaders, with or without a MiniQuip operator/driver.

In a pattern familiar to many employers, Mr Fenton said that, during good times, his staff often left for lucrative contracts being offered in the Mid West or further north, only to return to the small business sector when the economy slowed, although little work was available.

Much like the early 1990s, the construction industry is now facing challenging times, he said, which was flowing down to small businesses like MiniQuip, with many owner-operators within the industry departing as they are unable to sustain the downturn and lack of infrastructure programs.

But instead of reducing the number of employees to offset the decline in available work, MiniQuip has focused on employing and retaining quality core staff to value-add to customers, while retraining and up-skilling its current roster.

"In the last 20 years, our company is very affected by the strong economic environment," Mr Fenton told WA Business News.

"During the Western Australian boom, it was incredibly hard to keep good operators in such a transient industry as they were lured up north for the big mining dollars.

"With the decline in the industry, we have maintained a core group of good staff that have stayed and know the company well enough to work through this tough time.

"Our biggest problem at the moment is adjusting to the economic downturn, as it had such a swift decline from the boom time when we were inundated, with some equipment booked out for up to two months in advance.

"We are grateful that we have built good relationships with our customers to see us through this economic change."

MiniQuip has used the opportunity of a downturn to streamline its operations and internal procedures.

This includes introducing a new software package to assist with bookings and asset management, which will help the business report and keep up to date with projects, maintenance schedules of machinery, and also track the costs across the life of a project.

"We have used this opportunity of more time [from lack of projects] to invest in staff training for upcoming projects to ensure we have the most knowledgeable staff on site every day and ready to go," Mr Fenton said.

"Specifically, we have trained our staff how to better access rail, communications and power sites [for when they come online] and increased first aid training in the event of an emergency.

"Currently our staff are working and training with the new software to allow quicker time for booking and easier information access.

"The on-site training for our operators allows them to become more knowledgeable on project work for future jobs.

"On the marketing and business development side we have developed a new website, which was launched in May and showcases our range of equipment and services on offer.

"The site is updated weekly with company and industry news which will inform readers and keep them up to date."

Mr Fenton said as a result of implementing these strategies, the business had enjoyed an increase in tender and quotation requests.

He said while the level of work in the sector continued to be slow, there were some signs of an industry recovery in the latter half of 2009.