There is a fascinating divergence between the mining industry and government in how they view investment in the Pilbara. 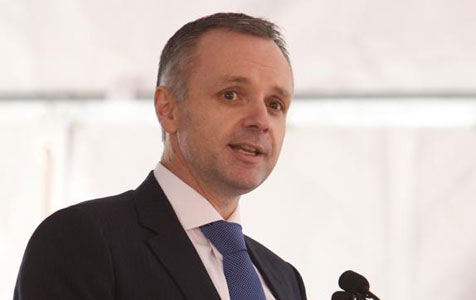 Rio Tinto iron ore chief executive Andrew Harding says his focus is on the savings Rio is extracting from the business.

There is a fascinating divergence between the mining industry and government in how they view investment in the Pilbara.

Politicians love nothing better than cutting ribbons at official openings – the bigger the better.

The Pilbara mining sector has delivered plenty of opportunities over the past decade for politicians to join with industry leaders in opening new mines, wharves and railways.

Big new projects are a sign of economic progress and job creation, and that’s the script from which government ministers are still singing.

The mining industry, however, has changed its tune.

We no longer hear about multi-billion dollar expansion projects. Instead we hear about miners’ unrelenting focus on costs and efficiency, as they look to maximise earnings and dividend payments to shareholders.

Premier Colin Barnett issued a statement announcing state government approval for two mine developments by Rio Tinto in the Pilbara.

He said the West Angelas and Western Turner Syncline mine projects would involve an investment of $880 million and create more than 760 new jobs, mostly during the construction phase.

That is factually correct.

He said matter of factly that Rio no longer announced each of its brownfields expansion projects because they were not ‘material’ to the market.

Instead, his focus was on the savings Rio was extracting from the business.

When he spoke about Western Turner Syncline, he highlighted plans to use a trucking option to link the phase 2 expansion to the existing phase 1 conveyor and crusher.

The upside, he said, was that Rio would defer capital spending of about $500 million.

And when Mr Harding spoke about the West Angelas expansion, he said it allowed Rio to defer its Silvergrass greenfields mine development.

And, he added, the Koodaideri mine – a much larger greenfields project – will now not be required until at least 2019.

In summary, Rio plans to save $US3 billion by pursuing brownfields expansions rather than new mines.

It was a similar story for BHP Billiton iron ore president Jimmy Wilson, who said the miner was “very focused on squeezing more out of our existing assets”.

At the new Jimblebar mine, for instance, improved productivity meant staffing levels were 25 per cent less than planned.

Mr Harding took the focus on cost cutting to a new level.

“With a granular focus on productivity and asset utilisation, there are literally hundreds of improvement opportunities and we are targeting each and every one of them,” he told the conference.

At West Angelas, for example, more efficient use of larger trucks has resulted in six of 55 trucks being made redundant.

Other examples included a $4 million reduction in hire car spending, a $1.4 million saving in crane hire at Brockman 4, and a $5 million saving from relocating administrative staff from the Pilbara to Perth.

Rio has also lopped $20 million a year off training costs by focusing on “what is really necessary, and streamlining its delivery”.

This is the new reality of business in Western Australia.

It has been driven by the big corporates and is cascading down, from contractors and engineers to service providers on St Georges Terrace.

Mr Barnett should take careful note. With the fiscally conservative Troy Buswell no longer controlling the purse strings, the premier and incoming treasurer Mike Nahan will need to ensure the upcoming state budget is fashioned to suit much more stringent times.