A team of local researchers is taking the next step in a program analysing the use of chemicals in smoke to grow seeds for mine rehabilitation. 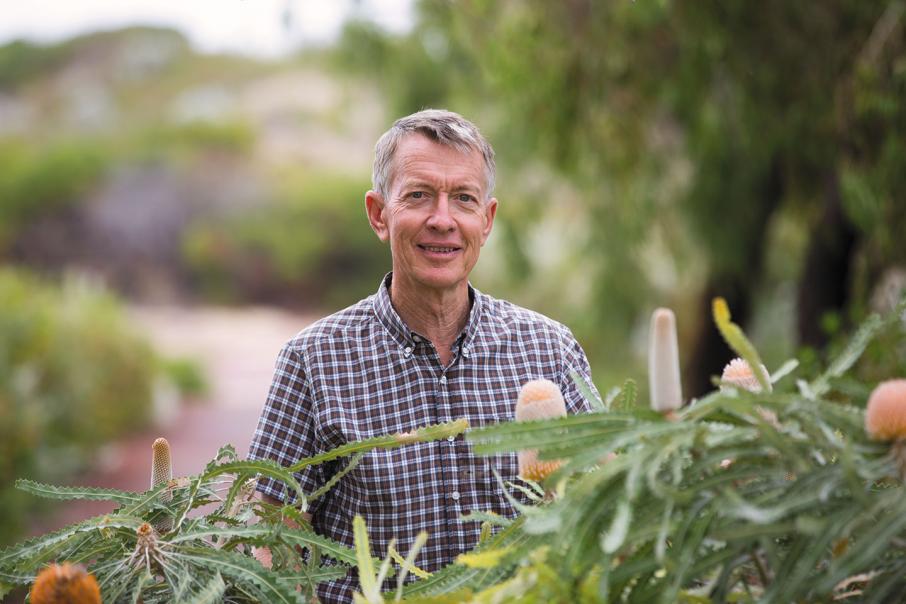 Kingsley Dixon says he and his fellow researchers had concentrated their studies on fire’s heat and ash, but found the answer in the smoke. Photo: Attila Csaszar

Australian biologists spent decades last century trying to figure out how bushfires led to the regeneration of native flora, before the pieces fell into place for a Perth academic on a trip to Africa in the 1990s.

Kingsley Dixon said he barely slept on the flight home once he had realised he might have made a significant discovery in the field, one which many years later helped him earn the WA Scientist of the Year award (2016).

“I stumbled across some work done by colleagues in South Africa where they had found puffing smoke on seeds of South African species made a difference (to germination),” said Professor Dixon, who is director of the Curtin University-based Training Centre for Mining Restoration.

At that time, he said, researchers were unable to regenerate about half of Australia’s native species, even though it was known that they would grow after bushfires.

“We checked the heat and the ash, and the ash and the heat, and we went backwards and forwards for an eternity, but still we couldn’t get half of them to germinate,” Professor Dixon said.

“This smoke, which is of course the third and the most obvious aspect of a fire, had escaped our attention.

“It took us a year when we got back from South Africa to work out our native species needed much higher concentrations of the magical smoke.”

Eventually, the research found about three quarters of species that had not successfully been regenerated previously would do so through application of a chemical found in the smoke from bushfires, called a karrikin (from the local Nyoongar language in which karrik means ‘smoke’).

The mining industry was an early supporter of the program, as companies recognised the potential it offered for them to meet their biodiversity obligations for rehabilitation.

Most miners buy native plants for mine rehabilitation and revegetation through production nurseries, which use smoke to encourage growth, although some miners do their own smoke cultivation.

The process involves the binding the smoke with water and then delivering this mix to the seeds, which have been placed inside a porous container.

“Everybody wanted to try and get this into their rehab prescriptions,” Professor Dixon told Business News.

He said the researchers first developed techniques for growth in a nursery setting, yet really wanted to be able to support growth on open land.

That led to a further challenge.

“We could bubble smoke through water, but we needed 10 tonnes of the smoke water per hectare to get the same effect as a bushfire,” he said.

“(For) the average mining company that might clear 650 hectares a year, it’s just not going to work.”

The next breakthrough was finding that only eight grams of the active chemical would be needed per hectare.

Professor Dixon said he hoped to secure further investment from the mining sector as commodity prices began to stabilise, and that there was increasing interest in the topic, including a Senate inquiry into mine site rehabilitation, which is due to report in August.

That was on the back of a report by the Australia Institute, which Professor Dixon said found there could be 60,000 abandoned mine sites across the country.

The number could be an underestimate, he said, with almost 40,000 mines in Western Australia.

The technology also has applications outside of mining rehabilitation.

Professor Dixon said while grains and horticultural crops had had specific dormancy genes bred out of them, native weeds did not.

The weeds also invariably regenerated every year due to their durability, even when action was taken to control them.

Professor Dixon said the karrikin chemical could be used to cause suicidal germination in weed species, acting as an environmentally friendly control method.

He said estimates had shown weeds cost Australian farmers around $1.5 billion to control annually, and an additional $2.5 billion in lost production.

A representative from European research consortium Syngenta, a company that specialises in agribusiness, joined Professor Dixon’s team in February to further research this topic.