The mining sector is the largest supporter of indigenous businesses in Australia, but the contribution of the big miners is highly variable. 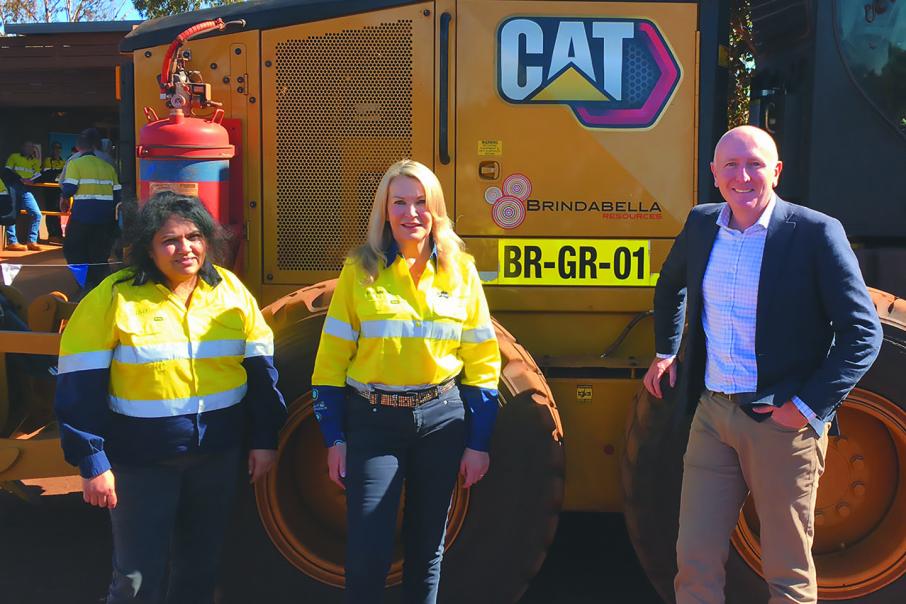 The mining sector is the largest supporter of indigenous businesses in Australia, but the contribution of the big miners is highly variable.

The Aboriginal business sector is large and growing much faster than the rest of the economy, two reports released this year have found.

Supply Nation, which runs an accreditation scheme for Aboriginal businesses, has 2,335 suppliers on its national directory.

Its State of Indigenous Business report found these businesses have annual revenue of $3.9 billion and more than 30,000 employees.

It also found rapid growth in revenue by Aboriginal businesses.

A study by the University of Melbourne, which drew on data from Supply Nation and several other sources, found the Aboriginal business sector was even larger.

It estimated there were 3,619 indigenous businesses across Australia, about double the number in 2006.

These businesses have annual revenue of $4.9 billion and employ more than 45,000 people.

“It shows us that indigenous businesses bring not just significant economic impact, but far more,” she said.

The university study found Aboriginal businesses were larger, employed more people, and paid higher wages than non-indigenous businesses, largely because of a lack of sole traders.

“On top of that, the sector is growing more quickly,” it concluded.

The University of Melbourne study found that Aboriginal businesses were weighted towards regional areas, particularly northern Western Australia and the Northern Territory, where they primarily service the mining, tourism and health sectors.

Government members accounted for $340 million, with half of this from the Department of Defence.

Corporate members accounted for a much larger $617 million, with nearly half this ($296 million) coming from mining companies.

The next largest sector was construction ($203 million), which likely includes work on mining and roads projects.

The big iron ore miners in the Pilbara are widely recognised as leaders when it comes to procurement from Aboriginal businesses.

However, data obtained by Business News shows an extremely wide variation in their spend in WA.

Rio Tinto, which is the biggest miner in the Pilbara, said that last year it engaged 57 indigenous businesses with $218 million in expenditure.

Its competitor, BHP, has reported much lower spending.

In the current financial year, it has spent a similar amount, $66 million, so far.

On top of this, BHP is a big funder of an indigenous ranger program in the Pilbara. It spent $14 million on this program last year, employing 385 Martu rangers.

At the other end of the scale, Fortescue Metals Group spent $354 million with 63 Aboriginal businesses and joint ventures in FY20.

This was part of its Billion Opportunities program, which has awarded $3 billion in contracts to 130 Aboriginal businesses and joint ventures during the past decade.

Fortescue’s focus on Aboriginal contracting reflects the philosophy of its founder and chairman, Andrew Forrest, who advocates ‘a hand up, not a handout’.

The flipside of this philosophy is that Fortescue has in some cases resisted the payment of royalties to native title holders.

“Procurement is a powerful tool for social and economic change,” Ms Gaines said. 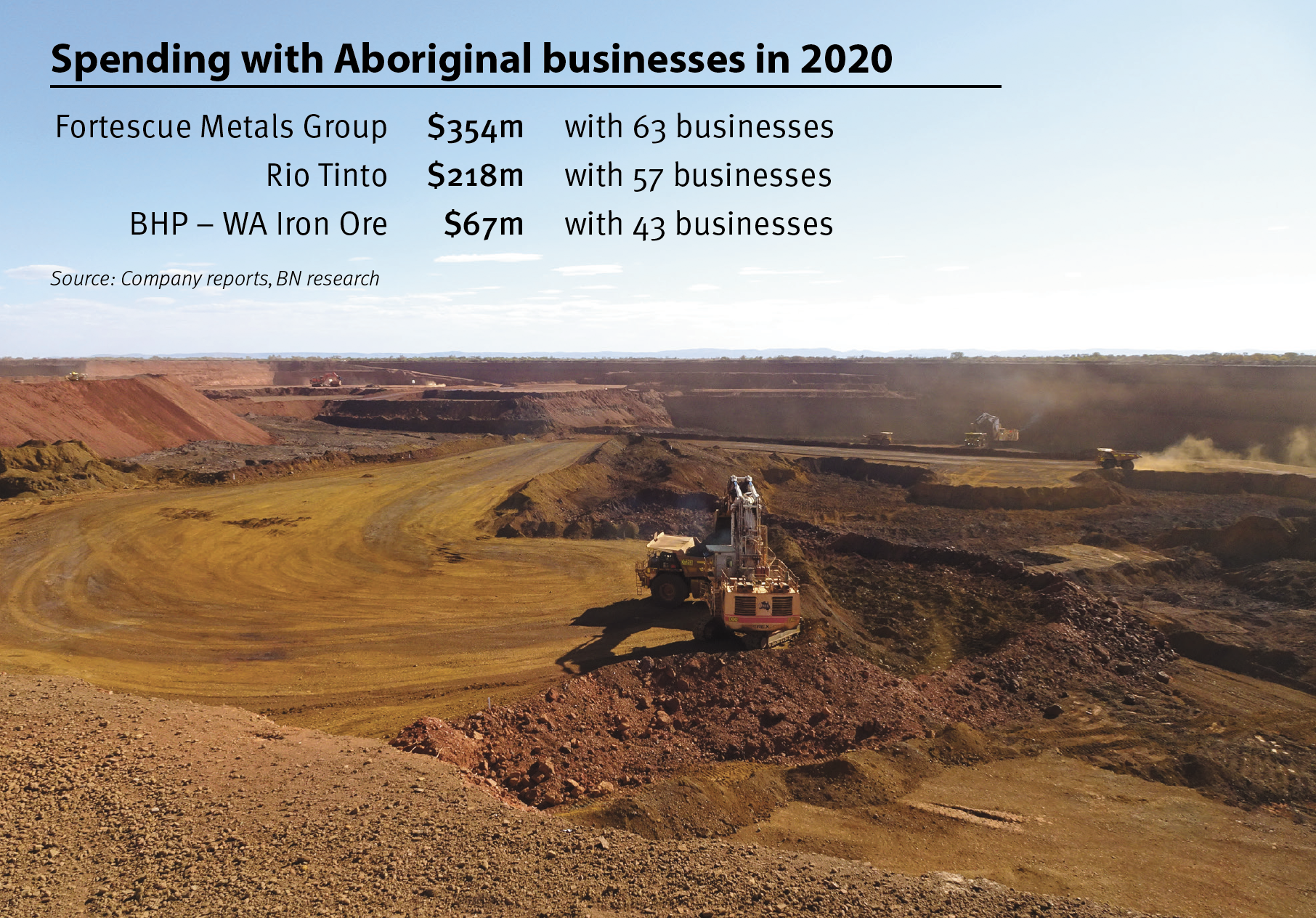 The wide variation between the big iron ore miners begs the question of whether the data is like-for-like.

BHP, for instance, says only businesses that are owned 50 per cent or more by Aboriginal people are included in its statistics.

It also highlights its engagement with traditional owner businesses.

Fortescue quotes similar statistics. During the past three years, more than 50 per cent of contracts it has awarded under Billion Opportunities were to majority owned Aboriginal businesses.

They provide the opportunity for Aboriginal businesses to partner with established contractors to help build their capabilities, before securing contracts on their own.

When asked about joint ventures, Fortescue acknowledged not all its contracting partners were Supply Nation suppliers.

That helps to explain why the reported spending by the big three iron ore miners in WA ($639 million) greatly exceeds Supply Nation’s data on total spending by mining companies across Australia ($296 million).

(Rio Tinto has not provided a detailed breakdown of its Aboriginal contracting.)

“These contracts are not handouts, they are real contracts with real deliverables,” she said.

Ms Gaines added that Fortescue helped some Aboriginal contractors along the way.

“We have people who are dedicated to working with our Aboriginal business partners, to helping them develop business plans,” she said.

“Some of these contracts might start off very small; it might be one piece of equipment undertaking some work.

“But we have then worked with those businesses to help them grow.”

“We restructured our procurement policies and practices to ensure that our contractors also adopted our level of commitment to Aboriginal engagement.”

Other steps taken by Fortescue include 14-day payment terms to improve operational cash flow and a $50 million leasing facility with ANZ Bank.

Fortescue has provided guarantees for $25 million worth of loans under this facility.

BHP and Rio also have programs to support Aboriginal businesses.

In addition, the two big miners provide support through regional chambers of commerce in the Pilbara.

Rio’s grow local program, for instance, engages businesses through a series of workshops and events in Karratha, Tom Price and Newman.

A BHP spokesperson said the company was aiming to substantially lift its national spending.

“BHP is committed to creating opportunities for indigenous businesses and over recent years we have increased our spend significantly, with more than $800 million spend estimated in the next five years,” they said.

“We continue to improve and simplify our processes so it’s easier to do business with us.”

Fortescue is also aiming for more: it plans to award $1 billion of contracts to Aboriginal businesses and joint ventures through its green energy program by 2030.

The sector has received a big boost from state and national programs that mandate a minimum proportion of contracts must go to Aboriginal businesses.

The federal government’s indigenous procurement policy (IPP) has awarded $3.5 billion worth of contracts to 2,000 businesses since it was implemented in 2015.

“In terms of encouraging Aboriginal business growth through procurement, we are on the same page as Fortescue and I want to commend the company’s inspiring leadership in this space,” Mr Dawson said.

“We were so impressed by the national policy we committed to implement a similar scheme in our state.”

It exceeded its 2 per cent target last year, with 5.5 per cent of contracts awarded to Aboriginal businesses.

They were led by Pilbara Meta Maya Regional Aboriginal Corporation, which was awarded $40 million worth of contracts by the Department of Communities.

It is one of WA’s largest Aboriginal corporations, with annual revenue of $18 million and 80 staff (see list).

It employs 21 Aboriginal people, including board members.

That is a relatively low proportion for an Aboriginal business.

On average, one third of employees are Aboriginal, according to Supply Nation data.

Carey is arguably Australia’s oldest and most resilient Aboriginal business.

However, it has been overtaken as the state’s largest Aboriginal business by another mining services contractor, according to Business News’s Data & Insights.

Warrikal chief executive and major owner Amanda Healy said her business had about 650 staff, double the number it had a year ago.

The Aboriginal business sector in the South West does not have big operators like the Pilbara and Kimberley.

Nonetheless, it is substantial, judging by the Noongar Chamber of Commerce, which has 420 members and 14 corporate partners.

“We have a fully tenanted hub in Subiaco, with 10 Aboriginal businesses working from that space.

“We filled it very quickly and we have a waiting list.”

Mr Milsom said he would like to replicate the hub in other areas, such as Midland, Joondalup, East Perth and possibly Fremantle.

The chamber’s regular programs include a two-week on-boarding course for indigenous job seekers.

Chamber president Gordon Cole said its activities were linked to the Noongar cultural philosophy of commerce and trade.

“The colonial process took it away,” he said.

“It’s like we are reclaiming our commerce and trade on country.

“We work from that philosophy.”

Mr Cole said the chamber was regularly approached by both young people and elders wanting to set up a business.

“It’s giving people the belief they can actually do it,” he said.

“Having business role models is crucial.”

Indigenous construction company Marawar is keen to lift the profile and performance of the Aboriginal business sector.

Established in 2018, the company has a 55 per cent Aboriginal workforce and claims 90 per cent staff retention.

Noongar traditional owner and director Gerry Matera said the role of Aboriginal engagement manager was at the heart of the company’s business framework. At Marawar, it was a role assumed by Aboriginal woman Carmel Smithson.

“We invest heavily in our people, which means addressing individual challenges at great depth, whether that’s ensuring they have petrol for their car, support for their family or a sense of self and community,” Mr Matera said.

“Most of these young kids are just surviving and their main concerns are things that others take for granted, such as mobile phone credit, bus money and how they are going to get to work.”

He said Marawar’s engagement model sought to blur the lines between commercial operation and social enterprise.

It has combined that approach with work on several large projects, including Bunnings in Albany, Match apartments in Fremantle, and Armadale Emergency Health Service. 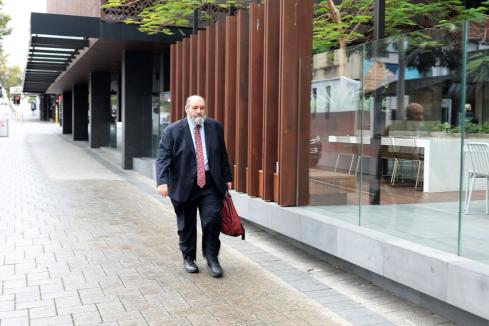