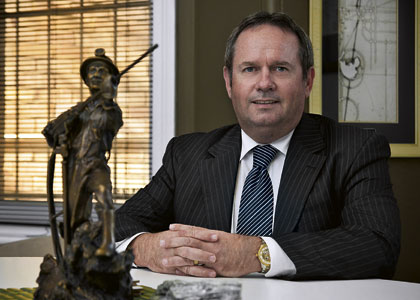 Just days earlier, the company behind the Gwalia gold mine in Western Australia, St Barbara, had unveiled a billion-dollar deal of its own in the form of a takeover for Papua New Guinea gold developer Allied Gold.

The pair of deals suggested that mergers and acquisitions in the WA gold sector were back in earnest, as companies cashed up after more than a decade of rising prices began to buy one another. Sure enough, within days of the end of Diggers, gold miner and market darling, Regis Resources, unveiled a $150 million purchase of the McPhillamys gold deposit in NSW from Newmont Mining and Perth-based Alkane Resources.

However, the recent flurry of deals masks a surprising fact.

While the bulging bank balances of WA’s gold miners suggest we should be in a ‘golden patch’ for deal making, the numbers suggest the opposite is true.

Despite the recent flurry of well-publicised deals, Australia’s gold industry is on track for its quietest period of M&A for several years.

According to data from Bloomberg, the Australian gold sector has so far witnessed just less than $US2 billion of deals so far this year.

That pales in significance compared to the $US10.8 billion in deals last year, and the whopping $US15.3 billion recorded in 2010.

As it stands now, and despite what many would have believed after the Silver Lake-Integra and St Barbara-Allied unions, this year will be the quietest for gold M&A in Australia since 2007.

It is an outcome that by no means reflects the capacity of the sector to complete deals – arguably, that capacity has never been better.

Gold prices in Australian dollar terms have been on a near-constant upward trajectory since 2000. Since 2005, the $A gold price has climbed from less than $600 an ounce to more than $1,600/oz at present.

Production costs, of course, have also risen as labour shortages became more acute and demand for equipment and services intensified. Those rising pressures have generally been outpaced by rising gold prices, meaning most gold miners of all sizes have rarely had it better.

While most mining executives don’t seem to have a problem spending money, the data suggests they are now taking a more cautious approach.

On that note, the recent financial results released by a swag of WA gold miners suggest executives are taking a more favourable view towards returning capital to shareholders, rather than aggressively chasing the next deal.

Miners such as Northern Star Resources and Kingsrose Mining, which have emerged from seemingly nowhere into highly profitable miners in recent years, have both declared maiden dividends in recent weeks. Resolute Mining, owner of the Syama gold mine in the West African nation of Mali, in late August announced its first dividend payment in 13 years.

It is understandable that investors would be keen to see dividend payments at present, given the challenging conditions that other sectors of the equity market have experienced in recent years.

While WA’s gold miners appear to be more determined to keep their powder dry and focus on dividends at present, executives and analysts alike expect to see the flow of deals improve.

There is an important justification for deal making in the gold sector that goes beyond growth just for growth’s sake. By increasing the scale and production base of a gold miner through acquisitions, such as the Silver Lake and St Barbara deals look set to achieve, the enlarged miners open themselves up to investment from funds and institutions whose in-house investment rules would otherwise prohibit them from investing in smaller stocks.

Australian investors in particular are starved of opportunities to back mid-sized gold producers with a substantial production base. Since Newcrest Mining bought Lihir Gold in 2010 for $9.5 billion, there has been a gaping void in the mid-tier gold sector.

Under Northern Star’s recent commitment to return $10 million to shareholders in the form of dividends, the miner will be left with up to $85 million in surplus cash this year, which managing director Bill Beament said would leave “ample firepower to take advantage of any acquisition opportunities”.

Troy Resources has doubled its revenue and profit in the past year, and now has net cash of $40.9 million. The company has been paying dividends for the past 13 years, but with its Brazilian gold mine getting towards the end of its life, the company wants another mine to complement its Casposo operation in Argentina.

The burgeoning bottom lines of Australia’s gold miners, and the queue of executives willing to talk up their takeover intentions, is prompting plenty of speculation about what could be the next target.

Foster Stockbroking is tipping the level of gold M&A to accelerate in the coming months, with gold explorers sitting on sizeable, advanced discoveries likely to be prime targets.

“Given current market conditions, it is cheaper for companies to acquire assets on market as an alternative to starting afresh with new projects,” analysts at Foster said.

The brokerage nominated Perth-headquartered pair Azimuth Resources, with its promising West Omai gold discovery in the South American nation of Guyana, and Glory Resources, which owns the 830,000oz Sapes gold project in Greece, as two explorers and developers likely to pop up on some corporate radars.

Resolute, with the $139 million in cash, bullion and investments to its name, and Unity Mining were named by Foster as two companies in a good position to acquire other miners “when market conditions for its peers are constrained and crying out for cash”.

The bank balances are there; it’s just a question of when the chief executives of WA’s cashed-up gold miners decide to act.