Tensions between WA’s major iron ore producers and their smaller competitors will be on show at a major conference this week. 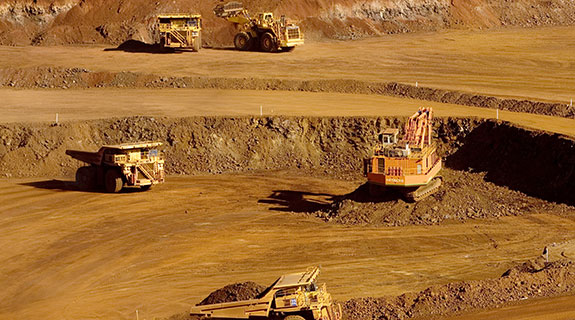 FLOOD: Rio and BHP no doubt will argue that their production strategy is in shareholders’ best interests.

Tensions between WA’s major iron ore producers and their smaller competitors will be on show at a major conference this week.

The gloves will be well and truly off at a major conference to be held in Perth this Tuesday and Wednesday.

In the blue corner at the Global Iron Ore & Steel Forecast Conference on March 10 and 11 will be the senior iron ore executives of Rio Tinto and BHP Billiton.

In the red corner will be their poor relations – executives from small iron ore mining companies struggling to survive at a time of low commodity prices.

Rightly or wrongly, there is a popular view among the smaller miners that overproduction by the big companies has flooded the iron ore market and destroyed the price, which has, in turn, sent their businesses plummeting into heavy losses.

Organisers of the two-day event are certainly aware of the heat in the debate, resorting to a tactic popular with mothers when their children are fighting – to separate the warring parties.

In what looks like the equivalent of being sent to their bedrooms, the big producers have been allocated podium time on Tuesday morning, while the smaller producers will be speaking on Wednesday afternoon.

Both sides will undoubtedly argue their case, with, Rio Tinto iron ore boss Andrew Harding, and BHP Billiton’s local iron ore leader, Jimmy Wilson, sure to say that they’re simply doing what’s best for their shareholders – which is their legal duty.

Both Messrs Harding and Wilson are pumping out as much iron ore they can at the lowest possible price, a competition in which Rio Tinto with a cash cost last quarter of just $US17 a tonne is winning, largely thanks to its more efficient rail and port systems.

BHP Billiton is not far behind Rio Tinto with $US20/t its target cost; but after that it’s a long way back to Fortescue Metals Group, and then even further back to companies such as Atlas, BC Iron and Cliffs.

The smaller producers, led by Ken Brinsden from Atlas and Morgan Ball from BC, are equally certain to argue that flooding the iron ore market is a cynical way for the bigger producers to seize market share; and if higher-cost rivals risk become road kill in the process, that’s their problem.

Mr Goncalves last month widened the debate about iron ore pricing by attempting to rope in the Australian government as a player in the complex game, accusing Canberra of manipulating currency markets to ‘save’ the local iron ore industry.

Whether Mr Fitzgerald uses his speaking opportunity to square up with Mr Goncalves will be one of the highlights of the second day, even if it is to remind the Cliffs boss of Mrs Rinehart’s surname.

Some of the topics listed for the speakers reveal the direction of their arguments. Mr Paterson from Brockman wants to talk about shared infrastructure, a natural theme for a man who needs railway access to develop his mine, while Mr Brinsden wants to talk about ‘accommodating all players in the market’ (as if Rio Tinto and BHP Billiton care about that).

When the iron ore price was above $US100/t there was room for all producers, and the annual conference was more like a meeting of old friends.

This week’s event will certainly not be a gathering of friends, with everyone seeming to have a complaint to make about someone else.

The small miners and project developers hate the big miners while the American view, as expressed by Mr Goncalves, is that Australians are currency manipulators.

Fortunately for the senior representative of the Western Australian government at the conference, Mines Minister Bill Marmion, will be able to do his duty as the opening speaker and then retreat to the safety of his office, leaving the war zone to the combatants.

However what everyone will be waiting to hear is whether Mr Marmion supports the big miners, which are two of the state’s major employers and taxpayers, or the small miners who want to expand but can’t in a flooded market.

As a true politician it’s a fair bet that Mr Marmion will try to walk a line between big and small, a tactic that will save him from taking sides – and please no-one in the process.

NOT listed as being invited to speak, but potentially offering a sideshow on the sidelines, is the union movement, which last week bought into the iron ore market-flooding debate with strongly worded criticism of Rio Tinto and BHP Billiton.

Delegates to the annual conference of the Australian Workers’ Union passed a motion condemning the big two for ‘unconscionable conduct and misuse of Australia’s natural resources’, with a secondary charges of ‘cartel-like’ behaviour and for conducting a ‘scorched-earth attack’ on smaller miners.

While the union attack is undoubtedly a case of verbal overkill, it does cause an interesting problem for the WA government, which would prefer the small end of the iron ore industry to survive while not being seen to side with its political enemies in the union movement.

Over to you, Mr Marmion.

BERNIE Brooks, the former chief executive of Myer, is the latest victim of the intense competition that is destabilising the world of retailing; but he certainly will not be the last.

Woolworths, once the clear market leader in Australian food retailing, is stumbling from crisis to crisis, which investment bank Morgan Stanley last week described as ‘standing on the cliff’.

What was particularly interesting in the bank’s view was that Woolworths was paying a price for a list of commercial sins, which included growing too fast, failing to address competitive threats, lifting prices too high, and aggressive cost cutting which had lowered the quality of its offering to customers.

That comment on cost cutting is the one to bear in mind because other companies in other industries are playing the same game, and risk doing similar damage to their business if the cuts are too deep.