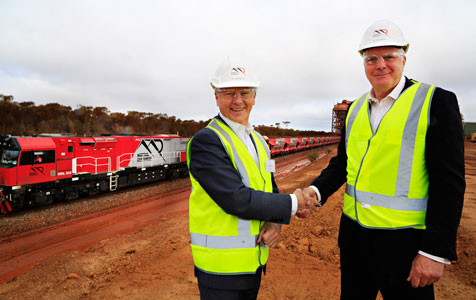 Mineral Resources, which shipped 10.4 million tonnes last financial year and expects to do better next year, bought the trains as part of its strategy to own and run as much of its operations as possible.

Pacific National has taken over the contract Aurizon previously held to operate the trains from Mineral Resources’ Carina mine near Southern Cross to Fremantle port.

The Carina mine currently makes up half of the company’s iron ore production, and while it only has a two-year mine life plans are under way to expand it and add other mines.

Technical services general manager Sean Gregory said the company was focused on its tenements, which extend over 6,000 square kilometres throughout Western Australia.

“Carina is just one of several confirmed ore deposits within (our) tenement holding,” he said.

“The company plans to develop other small satellite orebodies at Carina Extended, Chameleon and Hunt Range as well as three larger deposits in the near future, J4, J5 and Bungalbin East.

“Together these deposits will extend the mine life from the two years remaining at Carina to 15 to 20 years.”

“Your investment in these trains shows that you have a confidence in the future, not only in your company but the future of Western Australia,” he said.

Chairman Peter Wade said while Mineral Resources had lost out in its failed takeover bid for Aquila Resources, it still hoped to play some part in the company’s significant iron ore development plans.

“Baosteel has won the Aquila takeover bid. We’re pleased that with that takeover the opportunity down at Aquila will be developed and there will be more iron ore being produced in Western Australia,” Mr Wade said.

“We were looking to be involved, we hope to be involved still at some stage, but at the present time the Baosteel bid was more compelling.”