JODY Elliot launched recruitment website Mineblogger at the height of the resources boom to assist organisations dealing with the shortage of skilled labour. 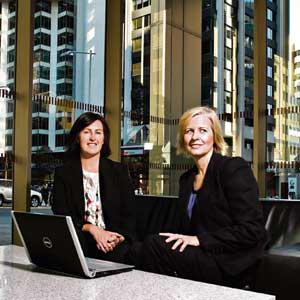 JODY Elliot launched recruitment website Mineblogger at the height of the resources boom to assist organisations dealing with the shortage of skilled labour.

The site provides employers, industry representative bodies and training associations with an avenue to communicate, or blog, with candidates from around the world about current and upcoming career opportunities.

Mineblogger was designed to provide a simple, one-way mechanism to publish customised information to passive and active job candidates about the (then) thousands of jobs available in the mining sector, minimising newspaper advertisement costs and bypassing the complexities of posting on a company website.

Industry majors Leighton Contractors, BHP Billiton, Rio Tinto, Santos, United Group and HWE were all early supporters of the site, encouraged by the capacity to directly reach candidates and communicate information otherwise found on a careers webpage or in a job advertisement.

But within two months of Mineblogger's launch, a number of the major resource companies that supported the site announced mine closures and redundancies.

Concerned initially by the skills shortage and then by the impact of massive job losses, Ms Elliot had to quickly adapt to a changing market environment, review the business's objectives and alter the initial business strategy.

Lisa Costa joined the business as partner and the company's focus shifted from a website to assist resources companies recruit labour, to a medium for out-of-work mining workers to find employment.

"Our problem became how to still quickly and effectively build subscriber numbers - both employer and candidate - and recoup costs associated with the phase-one website development in a very different and unexpected economic environment," Ms Elliot told WA Business News.

"In my role as recruitment manager for BHP Billiton, I recognised that one of the primary problems for recruitment in the resources sector is an inability to effectively communicate with prospective employees, to tell a much broader story than just a job ad."

However, the abrupt bust of the resources boom left initial supporters of the website sceptical. Sales of a 130-page 'inside guide' for candidates plummeted, forcing the business to reassess how it would fund the cost of the initial website development.

Mineblogger put development of the website on the backburner and focused on building a credible brand and expanding subscriber numbers.

The business began working closely with mine sites and businesses that announced closures - including BHP Billiton's Ravensthorpe site - to direct affected employees to the website for job information.

In turn, employers contacting BHP Billiton with jobs they had to fill were similarly requested to blog on Mineblogger.

This meant that employees, irrespective of where they were located, could log into a central point and access credible news about jobs.

"We also decided to make the 'inside guide' free to all individual subscribers within two months of our launch," Ms Elliot said.

"Then, we started posting on chat forums that the guide would be made available free, which generated a positive response.

"We reimbursed those who had already purchased and, in addition, we offered the site free to employers. This will be the case until phase two is launched later this year."

Effectively, Ms Elliot had to self-fund the website's development.

Later this year she will commercialise the revamped website, which will include a jobs board and links to associated career sites.

Organisations will then be charged to use Mineblogger's services, while individual subscribers will be able to access the site free.

Now averaging 100 new subscribers a week and more than 2,000 subscribers in total, the website is aiming to build a more personal relationship between company and candidate.

"The word-of-mouth associated with making the guide free has been invaluable," Ms Elliot said.

"While we've lost an initial income stream, this has been more than offset by the positive and free promotion we receive through word of mouth.

"The roll-on effect has also been that employers have come on board more quickly than we anticipated.

"They have seen the site as a great opportunity to brand and communicate in a way that is quick and cost effective. Our message to employers is that now is not the time to be silent.

"When the market picks up - and it will - you don't want to have been lost in a vacuum of silence, or worse, trying to offset the legacy of negative media coverage as a result of redundancies."