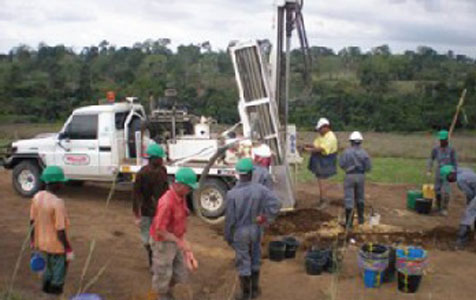 Exploration operations at the Kanzi project in the Democratic Republic of Congo.

West Africa-focused explorer Minbos Resources is seeking to raise $1.7 million to pay down debts, renew exploration licences and progress the sale of its Kanzi phosphate project in the Democratic Republic of Congo.

The Perth-based firm today announced an entitlement offer comprising two shares for every share held, at an issue price of 0.003 cents per share.

The offer is targeted at shareholders primarily in Australia and New Zealand.

The company said it would use $772,000 to repay its convertible notes and finance fees, while around $481,000 would go towards general administration and working capital.

The majority of the balance of the funds will be used to renew exploration licences at Minbos’s Cabinda phosphate project in Angola and to progress the sale of the Kanzi project.

Minbos's Kanzi assets comprise a 65 per cent stake in eight permits covering around 2,000 square kilometres in the DRC.

It has an inferred resource of around 55 million tonnes graded at 14.2 per cent phosphate.

At close of trade today, Minbos shares were trading at 0.004 cents.