Iron ore miner Mineral Resources is pressing ahead with plans for innovative ‘skyrail’ and trans-shipping projects in the Pilbara, saying that together they can cut $25 per tonne off its operating costs. 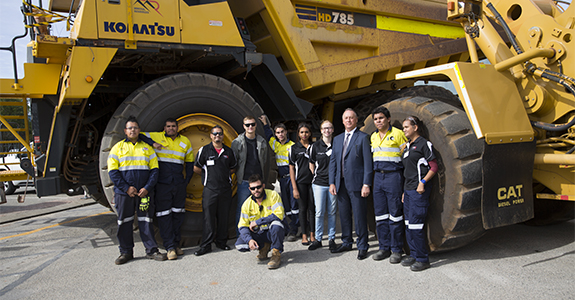 Iron ore miner Mineral Resources is pressing ahead with plans for innovative ‘skyrail’ and trans-shipping projects in the Pilbara, saying that together they can cut $25 per tonne off its operating costs.

Managing director Chris Ellison reaffirmed his commitment to these projects after launching an indigenous traineeship program at its Kwinana workshop this morning.

Mr Ellison said the company was looking to invest in trainees and new infrastructure, despite the weakness in iron ore prices.

He has also flagged the possibility of using its bulk ore transport system, or BOTS, to transport other commodities such as coal and grain.

“It’s something absolutely we are looking at,” Mr Ellison told journalists today.

Mr Ellison said his initial focus was building a BOTS system - which involves an elevated rail line sitting atop concrete pylons - from Port Hedland to its mining operation at Iron Valley, 330 kilometres inland.

“We are progressing that through to doing definite testing at a university in China,” he said.

The company plans to build a trial track in China in the second half of this year.

“By about the end of this year, we will be ready to move forward and start building the line at Port Hedland, subject to getting all the approvals through," Mr Ellison said.

“We anticipate it will be ready to go by the end of this calendar year.

“That’s all about getting bulk materials, iron ore, coal, even grain, from inland to the coast at a low cost.”

He said the system would be viable at a 10mtpa run rate, and could be used to develop stranded mineral deposits that are not viable with traditional rail lines.

“We will wash $20 a tonne off the current cost of trucking from Iron Valley to Port Hedland using the Bulk Ore Transport System," Mr Ellison said.

“We are also looking at a trans-shipment operation out of Port Hedland.

“If we get that up and running, we will probably knock another $5 a tonne from what we are currently charged.

“That’s a $25 a tonne saving from our current operations.”

Mr Ellison said he was positive about the company’s contracting operations, but conceded “our own mines are pretty tough at the moment”.

He is continuing to try and negotiate lower port charges at Kwinana and Port Hedland.

“At the moment they are making almost super profits off the juniors.”

“We are trying to get a lot more focused on employment for indigenous people,” Mr Ellison said.

“We haven’t done it as good as we’d like to as a company, and we’ve decided we‘re going to amp it up and get a lot more indigenous people in our workforce.”

He said the company has had a number of programs in the past but with mixed results.

“This is the first time we’ve focused right across the board, from understanding their culture, understanding issues they’ve got," Mr Ellison said.

“We need to change a little bit and they need to as well.”

He said he was hoping that indigenous employees would make up about 10 per cent of its workforce in 18 months.