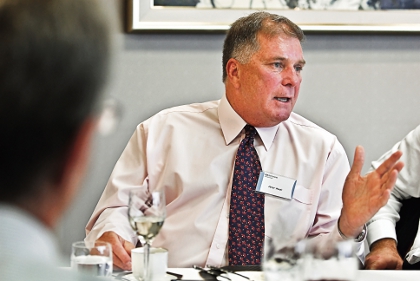 WA-founded Mineral Resources has reiterated plans to refocus on the contracting side of its business, signalling it may spin off its mature mine assets while remaining a long term service provider to those operations.

The proposed move, highlighted at its annual meeting today, could take the form of a demerger but was unlikely to occur in the immediate future.

It comes after a reshuffle of its management team and board with major shareholder Chris Ellison taking over as managing director and Peter Wade moving off the executive to become chairman.

After the meeting, Mr Wade told WA Business News that the plan to refocus on the contracting business had always been part of company’s strategy and that funds gained from monetising the mining side of its operations would most likely be employed in repeating the process.

“Now we have reached the stage where the plant is in operation, we can do some reasonable exploration and we can get the information to appropriately monetise the operation,” he said.

“Having said that it is not something that I can see coming up in the next 12 months; it is a minimum 18 months away, subject to valuation.”

At more than 3.7 million tonnes of iron ore production, Mineral Resources is a mid-tier miner within the same spectrum as Atlas Iron. It also exports nearly 300,000 tonnes of manganese.

It is also Australia’s largest specialist crushing contractor, materials handling and mining services provider with a combined installed capacity of more than 110 million tonnes a year for external customers.

Mr Wade said MinRes was confident of the growth prospects of both the piping business and the contract crushing business. He said the latter had the potential to double the tonnages crushed albeit with a diversification from its existing build, own, operate model to include a significant element of engineering, procurement, and construction management.

MinRes exported more than 1.7 million tonnes of iron ore out of Kwinana in the past year. It is also seen as a major player and facilitator in the proposed expansion of Esperance port.