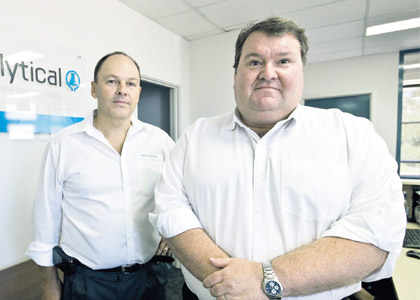 SIX years ago the assay-testing industry in Western Australia was largely in the hands of independent, privately owned businesses with headquarters in Perth.

Companies such as Ultra Trace, Genalysis and Kalassay were major competitors with national and international groups.

Some of those brands still exist but they are under new ownership after a wave of takeovers that has concentrated ownership in the hands of just a few big players.

The main winners from these takeovers were the vendors, who mostly sold out at premium prices just before the global financial crisis.

One of the early movers was Terry Wheeler, who established Genalysis in 1975 and sold the business in 2007 for a price of up to $56 million.

His younger brother, Gary, and former colleague Lee Gough have re-entered the fray in partnership with Ausdrill, establishing MinAnalytical as the newest player in the sector.

The business plan for MinAnalytical was hatched at the Diggers & Dealers conference in Kalgoorlie in 2010, after Ausdrill managing director Ron Sayers was introduced to Gary Wheeler.

With Ausdrill as the 80 per cent shareholder, the owners have budgeted to spend $10 million establishing the business.

They are well down that path, with a functioning lab in Canning Vale initially servicing gold and base metals explorers in Australia and Africa.

The lab is processing 40,000 gold samples a month and has the capacity to double that.

In the next few weeks it will install a fully automated XRF (x-ray fluorescence) cell and other equipment to start servicing the iron ore sector, with a particular focus on small to midcap companies.

Mr Gough said establishing a new facility meant they could buy the latest equipment and, just as importantly, “allowed us to build a lab that functions efficiently”.

“We were able to design the best work flow for a lab,” he said.

Mr Gough said they were also aiming to “get back to the personalised service that people used to get in the industry”.

One of the selling points for MinAnalytical is the way it works hand-in-glove with other Ausdrill businesses, including African Mining Services and Logistics Direct. That helps it achieve a typical 21-day turnaround for processing samples from Africa.

MinAnalytical’s competitors include UK-based Intertek Group, which bought the Genalysis business and still operates from its premises in Maddington.

Other competitors are Swiss company SGS, which bought local firm Scientific Services in 2001, and Brisbane-based ALS, which paid $123 million for local metallurgical testing and assay business AMMTEC in 2010.

The largest player in the market is arguably Bureau Veritas, which has a big local business courtesy of multiple acquisitions.

Its forerunner businesses included Ultra Trace, which Colin and Victor Eldridge sold for $80 million in 2007.

The buyer was private equity-backed Australian company Amdel, which was acquired by Bureau Veritas in 2008.

Bureau Veritas also incorporates the old Standard and Reference Laboratories, bought in 2006, and Kalassay Group, acquired in 2008 for $25 million.

The buyer in both cases was UK company Inspicio, which subsequently sold its Inspectorate division to Bureau Veritas in 2010.

Bureau Veritas has recently brought together its Perth operations to one location, with Kalassay now co-located at Amdel’s Canning Vale premises.