Military on course for business 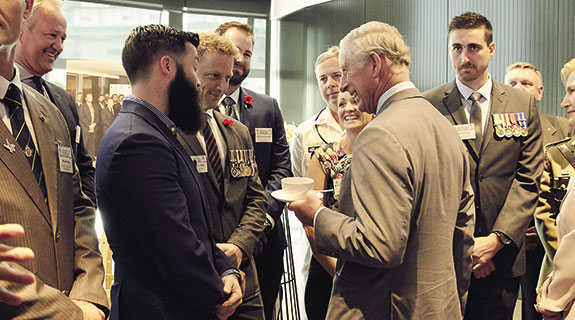 A CHARITY established by the Prince of Wales is helping former Western Australian military personnel transition into the small business sector.

The Prince’s Charities Australia, which was set up in 2013, held its first ‘Lead Your Own Business’ course this year, sponsoring 22 former servicemen, including six from WA, to complete Certificate IV in small business management.

Based on a similar program run in Canada, the course is one of several the charity operates in Australia with support from corporate sponsors such as EY, Defence Health, and Bakers Delight.

Among the participants of the business program to have developed commercial projects is Shaun Fisk, whose biodegradable marine shooting targets have received interest from the militaries of several nations, including the Department of Defence in Canberra.

Other former servicemen to make the transition are Brad Barr, who has founded an optic fibre business that won a $25,000 interest free loan from RMIT University, and Robert Underdown, who is planning to open a frozen yoghurt and ice cream business in Margaret River next year.

Also joining those at the ‘Lead Your Own Business’ course was Proactiv Payroll chief executive and former tank driver Roy Mellon, who was retrained by the military in payroll duties following an injury and started his own Perth business in 2009.

Mr Mellon, who is a 2014 40under40 winner and whose business won a 2015 Rising Stars award, told Business News he had been so inspired by the course he would be donating $9,000 to sponsor one WA participant next year.

“I really wish I did that course before I started my business,” Mr Mellon said.

He said the course, which included an intensive week at Melbourne’s RMIT and several months of online work, provided a good atmosphere for participants to learn business management and planning skills, as well as talk about shared concerns.

“Transitioning from the military to civilian is quite hard,” Mr Mellon told Business News.

“You’re taught to be very regimental, there’s a hierarchy structure and ranks, and when you’re a civilian it’s really loose.”

Mr Mellon said the former servicemen had bonded as they transitioned into what he described as a ‘softer’ working lifestyle.

He said while the military’s culture of respecting authority did not necessarily inspire entrepreneurialism, the participants had found they could capitalise on their behavioural training to treat each work goal as a mission.

“We are quite disciplined, so we do like structure. We aim for a polished, professional result, in whatever skill set it is, versus slapping it together in a ‘she’ll be right kind of approach’,” Mr Mellon said.

“Civilian life is very soft, it’s hard to describe and hard to adjust to, but I am very grateful to the military for teaching me those skills.

“Even through my civilian life I didn’t change my ethics or the way I worked, it was always about the goal to complete a task at the highest quality and have pride in what you do.”

Mr Mellon said he had been pleased to contribute something back to the charity, as he believed ex-servicemen had a lot to offer to the business community.

“There’s a couple groups on Facebook that try and hire veterans first, but there isn’t a program that teaches that skill set to say ‘right, let’s go into business’. It’s more ‘let’s get you a job’.”