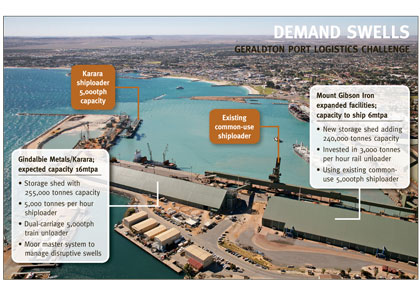 Capacity has now doubled to 10mtpa and the port authority has anticipated reaching 15mtpa by 2014 – a forecast which has underestimated iron ore miners’ expectations.

Gindalbie Metals and Mount Gibson both have big plans to increase the amount of ore shipped through the port in the coming months.

Gindalbie is ramping up its Karara mine, about 200 kilometres inland from Geraldton, with its first shipment of magnetite ore scheduled for September. It plans to reach production of 8mtpa by March next year.

The company will also ship 2mtpa of hematite ore, the first shipment due before the end of the month, which will bring Gindalbie’s total production to 10mtpa.

It appears to be in a good position, with new facilities including a 315-metre storage shed, shiploader and train unloader built at the port’s most western end – all for Gindalbie’s use only as opposed to the other common-user facilities.

Investing in a new dual-wagon train unloader, which can unload 5,000 tonnes of iron ore an hour, has enabled Gindalbie to commit to such production targets. At the height of stage-one production, four trains carrying Karara ore will run into the port each day.

Gindalbie expects loading a ship to take 12 to 14 hours and that process to be repeated for about 260 ships each year. If those plans work out in practice, it gives Gindalbie maximum capacity of about 16mtpa.

The company has also invested in ‘moor master’ systems, which enable ships to continue being loaded when unusual swells occur, normally forcing ships to leave the harbour. That is said to have increased the number of days Gindalbie can load ships by about 30 a year.

The moor master system is an advantage port neighbour Mount Gibson Iron does not have but it’s confident a just-completed expansion of facilities will enable shipping capacity of 6mtpa.

Mount Gibson has taken money out of its own pocket to upgrade the common-user train unloader so it can process about 3,000 tonnes of ore an hour – an improvement on the old unloader, which had a limit of about 1,700 tonnes an hour.

The company will eventually recoup its investment through user fees when the unloader is handed back to the port authority.

Mount Gibson had been using the older system to transfer about 2.5 to 3mtpa of ore coming from the Tallering Peak mine since 2003.

Production from Extension Hill has doubled the company’s production and prompted the port expansion, which also included building a new storage shed to take capacity to about 360,000 tonnes, up from 120,000.

The expansion was completed in May and enabled Mount Gibson to ramp up iron ore shipments and set a target of reaching annual production of 6 million tonnes this financial quarter.

Those plans, combined with Gindalbie’s, will see the port’s capacity reach 16mtpa in less than 12 months; not accounting for other iron ore producers or shipments of other goods such as grains.

A saving grace is that Mount Gibson only expects to be producing 6mpta for about a year, as its Tallering Peak mine is nearing end of life.

But it has not ruled out obtaining other projects in the Mid West, which could bolster its production rates.

Other miners also have plans to use Geraldton as a route to market for production coming on stream a few years down the track. Golden West Resources, for instance, has indicated it will ramp up production to 1mtpa of haematite once it can get port access at either Esperance or Geraldton.

But Asia Iron is likely to be the next to put pressure on the port, with its interests in the Extension Hill project yielding production of 10mtpa of magnetite. The first shipment bound for China is expected in 2014 and has environmental approvals to export from Geraldton.

It will avoid jostling for position on the in-bound train lines, however, by taking advantage of a slurry pipeline to take ore from mine to port.

Another potential exporter is Vanadium producer Atlantic, which has been in discussions with Crosslands Resources (owned by Mitsubishi) about using its port facilities to handle its iron ore fines by-product while Crosslands’ Jack Hills mine remains on ice.

That would add another 1mtpa of ore going through Geraldton if an agreement was negotiated.

Crossland’s Geraldton port capacity is capped at a maximum of 2mtpa because of the limited logistics, which emphasises the need for an Oakajee port development if the Mid West iron ore market is to continue to expand.

Gindalbie’s Karara production past 2016, when it plans to produce more than 16mtpa, depends on an Oakajee solution and the Jack Hills project to produce 25 to 35mtpa is only viable with an Oakajee port and rail link.

But they’re not the only ones; Golden West’s plans to expand the Wiluna West project to production of 10mtpa and production from Padbury Mining’s Peak Hill project also both depend on Oakajee.

Gindalbie chairman George Jones indicated last week that a decision on the Oakajee Port and Rail link was likely in September and would determine whether the current proposal would go ahead.

His long-held personal view is that the current proposal with specific link to the Jack Hills mine is not viable and has revealed miners in the southern part of the region are negotiating a back-up option.

But even a ‘Plan B’ would still be some years off, leaving miners to either stave off production until some version of an Oakajee solution eventuates, or continue nudging elbows and juggling facilities to increase capacity at Geraldton.