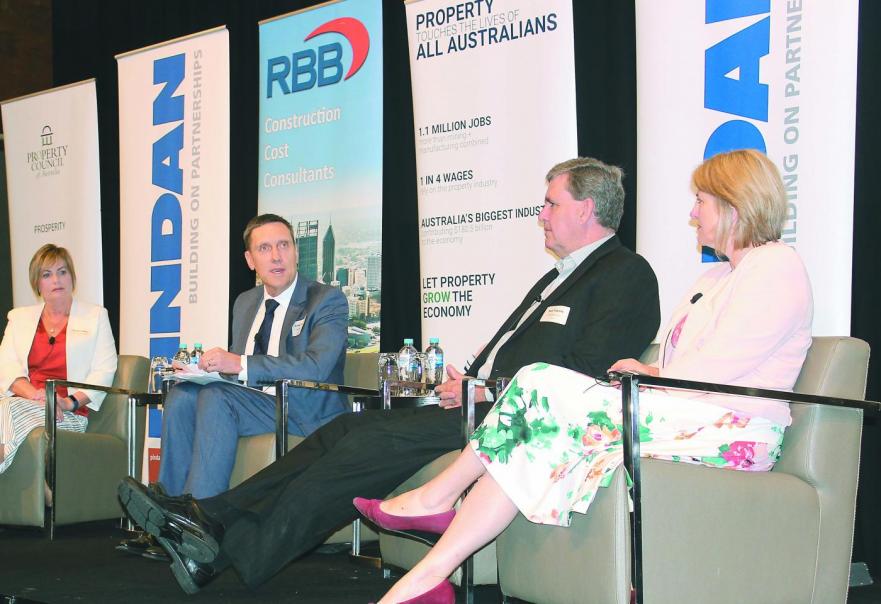 The state government’s Metronet rail project will provide the certainty for developers seeking to meet ambitious infill targets, according to a panel of industry professionals at a recent Property Council of Australia event.

Finding the right balance between infill development and urban sprawl in Perth has been a key issue in recent years, following a commitment by the Barnett government in 2010 for 47 per cent of all new housing to be built within the existing borders of the metropolitan area.

According to the latest Urban Growth Monitor report from the Western Australian Planning Commission, the net infill rate for the Perth and Peel region in 2015 was 34 per cent, an improvement from 31 per cent in 2014 but still well short of the target.

“If planned and implemented well, Metronet will be the vital missing link in getting more community acceptance for higher density development,” Mr Iacomella said.

“This is because the community can see the benefits that will come with greater housing density – more public transport and more local amenities, like local shops and employment opportunities.

“It also addresses the concern communities have with traffic congestion and higher density.

“However, the big challenge in making Metronet work is getting more support from local governments around the key station precincts.

“The government needs to get councils on board and get them to apply the state’s planning regulations consistently.

“The continuing role of development assessment panels will also be vital in achieving the density and mixed-use development outcomes around stations.”

The $2.5 billion first stage of Metronet includes the completion of the Forrestfield-Airport Link, the long-awaited construction of the Morley-Ellenbrook line, a rail extension to Yanchep, connecting Mandurah to Thornlie, the Byford extension, a new Midland station and a new station at Karnup, inner suburban light rail, better bus and train connectivity and new cycling infrastructure.

And that plan is already acting as a catalyst for development. As far back as late 2015, Satterley Property Group spent $120 million bulking up its Forrestfield land bank, with the land to yield around 2,000 housing lots.

Former Labor transport spokesperson Ken Travers, who was responsible for the early development of the party’s public transport policy, told the forum Metronet would provide the transport links needed for Perth to function as a polycentric city.

“What Metronet does is establish effectively the spine for public transport in Western Australia,” Mr Travers said.

“Stage 1 is good, the only part that’s still missing is there still isn’t a solution for transport in the north central corridor.

“Then the other part of it which is not there yet is the development of how we will make transport systems work in the inner core of Perth.

“That’s where light rail will come into its own and we need to get a proper plan for light rail.

“One of the sad things is the last government spent nearly $30 million planning light rail, then got a $15,000 study to completely destroy it.

“And it was always fundamentally flawed, because it tried to do two things – one which was to move residents from the outer areas into Perth as fast as possible, and the other was to try and be a transport plan as well as a land-use plan in the inner core of Perth; those two functions were completely mutually exclusive.

“Hopefully during the next term of government we will also see the development of a proper light rail plan that links land use to it and how to get that infill in the inner core.”

Committee for Perth chief executive Marion Fulker, who described Metronet as a game-changer in terms of allowing more people access to public transport, said the key question facing the property sector was what the state government’s delivery mechanism would look like.

“The government has to set the planning mechanisms well and then the private sector will come in, but it’s the mechanism for delivery, the Metronet delivery agency, which we’re still not clear on,” Ms Fulker said.

“How that is going to work and what role is it going to have across government and what powers will it have are all crucial.”

“I was very pleased to see the new minister say that she would like to have a review of what Forrestfield station does as a function, because the way it was designed under the previous government is that it’s a big car park and then it’s not very well connected to the existing suburb around it,” she said.

“There’s industrial on one side and residential on the other. So I think that’s critical and targeting those particular stations in Metronet where they can become even more urban is very important.”