What’s the next big-ticket item for Perth after decades focused on road, rail and port infrastructure? 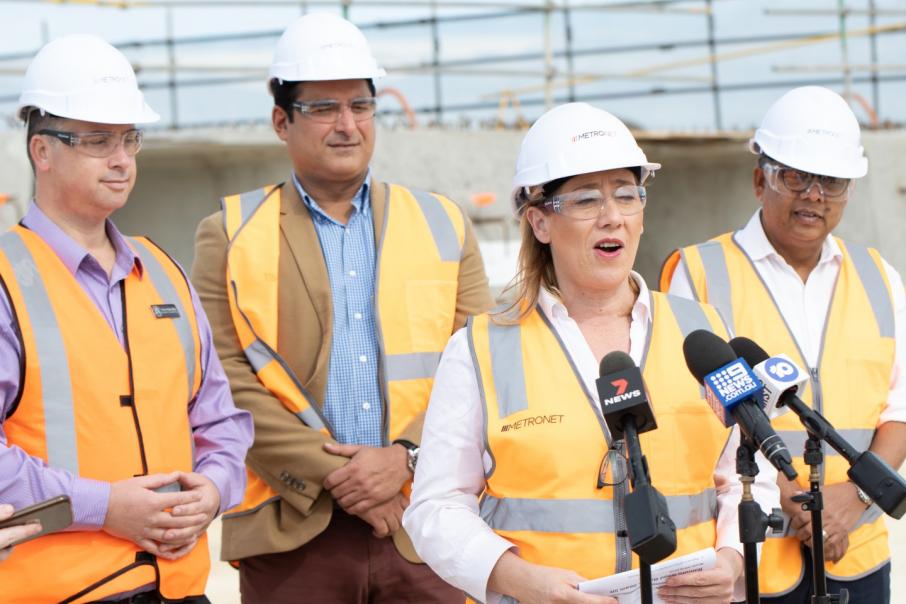 It took Labor just 60 days after winning this year’s state election to reintroduce legislation that would place Beeliar Wetlands under the highest conservation protections accorded by Western Australia’s planning department.

That move, which was defeated by a single vote in the upper house during Mark McGowan’s first term as premier, will effectively seal the fate of Roe Highway’s extension past the Kwinana Freeway, and with it the $1.2 billion that sits idle in the federal budget for that purpose.

Instead, WA’s container needs will be serviced by a new, land-backed port about 18 kilometres south of Fremantle Port, set to open in 2032 at a cost of $4.7 billion.

There are caveats, not least of all that any future environment minister can undo these changes with relative ease through a handful of legislative manoeuvres.

One can presume Liberal Party WA leader David Honey, if elected premier in 2025, would pursue those avenues, given the opposition has now tripled down on its support for extending the Roe Highway as the long-term solution for increased freight haulage in the coming decades.

One can also presume the federal government’s implied continued support for the project will keep the issue kicking at least until excavation works begin at Cockburn Sound.

Still, the subtext in her comments – and what they meant for the future of ports and transport in this state – was clear.

“We went to the 2017 election with a comprehensive plan for freight and trade for WA,” she said.

“We are implementing this plan, including planning for a new port in Kwinana, moving more freight onto rail and not proceeding with the flawed Perth Freight Link Plan.

“We introduced legislation in the last parliament which passed the legislative assembly.

“Now we have been returned to government, again with a mandate to pass this important legislation, and we are getting on with the job.” 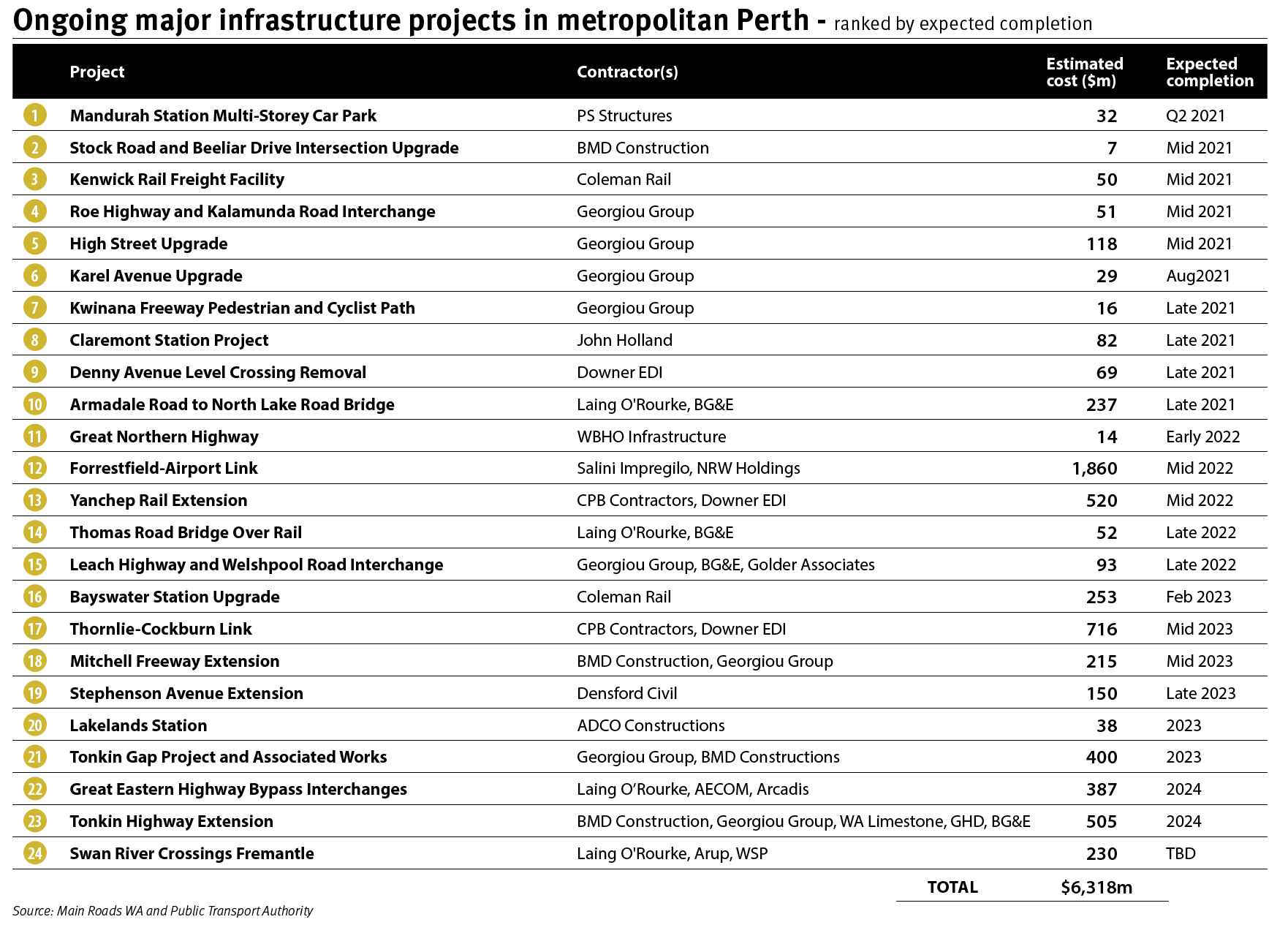 Ms Saffioti’s words signify the political reality for the state government, which is that, in WA, successful state governments have in recent memory often survived by the strength of their infrastructure vision.

Russell Dumas, an engineer prominent in WA’s public sector during the 1940s and 1950s, initially championed Perth’s growth through construction of Kwinana’s industrial area, the Mundaring Weir and Perth Airport.

Since then, infrastructure and big-ticket projects have become the cornerstone of most election campaign pitches, keen to grow the economy and stock of affordable housing.

Many, for instance, may recall Richard Court’s vision for a Mandurah railway line as more conservative than the current reality.

It’s likely that, were it not for Geoff Gallop’s election in 2001, the line would not have extended 100 kilometres to Joondalup, intersecting underneath Perth, as it does now.

Similarly, Ray O’Connor’s steep hill to re-election in 1983 was likely stymied by his decision to champion the closure of Fremantle’s rail line, with the resulting four-year campaign to re-open the line largely understood to have been a deciding factor in Brian Burke’s path to the premier’s office.

Conversely, too many projects can sour voters spooked by debt and deficits, as was the case in 2017, when the cost of constructing Optus Stadium, Elizabeth Quay and a railway between Forrestfield and Perth Airport became a political millstone around Colin Barnett’s neck.

COVID-19 has scrambled this vision in the long term, much as it has every other sector.

But so has climate change, which puts a question over structures built near eroding shorelines, and growing economic nationalism, which has pushed local and advanced manufacturing into the minds of policymakers across the political spectrum.

Lockwood Advisory owner and principal, and former chair of the now disbanded Westport Taskforce, Nicole Lockwood, framed the problem as an existential concern that extended beyond building more roads and freight networks.

“One of the questions that’s really come to the fore is, ‘How do we create optionality in our supply chains?’,” she said.

“It’s difficult in a jurisdiction as big as Australia and WA.

“Creating alternative routes to destinations is not a viable infrastructure outcome from an economic perspective, but we probably do need to rethink the way we construct all of our connections to ensure they are as well prepared for disruption as they can be.”

Labor has already shown some awareness of these needs, as they pertain to the opening of a new industrial hub near Kwinana, and an acknowledgement of permanent bushfire risk in the Department of Planning, Lands and Heritage framework for increasing the population of Perth and Peel to 3.5 million by 2050.

In the meantime, the state government has firmly focused its efforts on completing Metronet and substantially advancing Westport ahead of the next state election.

Significant headway has been made on the former venture, with the $716 million link from Cockburn station to Thornlie station and upgrades to stations along the expansive Joondalup to Mandurah railway line on track for completion by the middle of this decade.

For all the fanfare that followed the state government accepting Westport’s recommendations in August, reporting on the port’s development has slowed over the past six months.

State budget papers released in September indicate $97.3 million has been earmarked this financial year for environmental approvals and the creation of an overarching business case, which are set to be finalised at some stage this year.

About six months later came the hiring of Patrick Seares, a former director at the state’s Department of Water and Environment Protection Authority, as managing director for the project, wherein he has overseen preparations for the project’s third stage.

That process is scheduled to begin later this year and will include Environmental Protection Authority referrals and further assessments of the commercial implication of transitioning port operations to Kwinana.

These works are scheduled to finish by 2024, at which point contracts will presumably go to tender in time for the 2025 state election.

“The [second] stage of the Westport program will develop the business case for the scope, timing and investment in the new Kwinana container terminal,” a spokesperson for the project said.

“A key focus of this next stage of work is to ensure Cockburn Sound’s environmental, fisheries and cultural values are protected.

“This will be supported by an unprecedented investment in marine science allowing a holistic look at minimising impacts from development, and even opportunities to improve the management of the sound into the future.”

The biggest caveat to all of this is the political difficulties of any state government guiding a project of this size or scale to completion.

Ports are not easy structures to build, and on the initial, conservative timeline estimated by the Westport Taskforce, the construction of a new one is not expected to finish until 2032.

At that point, billions of dollars will have been spent on development across two state election cycles, with another to be held within a year of the port’s opening.

Given the cyclical nature of the state economy, prone to booms and busts, the possibility of the port surviving as currently proposed without any bipartisan buy-in is slim.

Beyond the port, however, lie broader issues with meeting the state government’s ambitious project deadlines for road and rail projects.

Market conditions are one consideration. Unemployment in WA is, as of April, at 4.9 per cent, far lower than the 5.5 per cent recorded nationally and the second lowest rate of all states and territories.

Workforce participation is high and overseas workers, whose presence would ordinarily relieve upward pressure on wages, have been all but barred from entering Australia for the foreseeable future.

Unemployment could yet sink further. At 4.9 per cent, it is higher than the decade-low rates of between 3.5 and 4.5 per cent recorded in the early years of the 2010s.

In the short-term, though, there may not be enough room in the workforce to accommodate the state government’s ambitious effort to triple expenditure on major road and rail projects in the coming financial year.

“This [is] at a time when private sector civil works are booming and competing for the same pool of people, machines and materials,”

Still, the state’s civil construction industry is riddled with room for fixes.

Mr Graham cites Queensland’s tight regulation of abnormally low bids for public works as a policy worth considering in WA.

These laws, if implemented locally, would essentially prevent contractors from bidding for work below a certain price, ensuring projects are sufficiently funded when shovels hit the dirt.

Conversely, reforming WA’s use of design-and-build contracts, which have been regularly used throughout Metronet’s lifecycle for railway infrastructure in Bayswater, Midland and Byford, may also save on costs and remove regulatory hurdles that arise from owning the design process.

“This allows contractors to be more flexible and efficient with their project and bid teams,” he said.

The question of what to build in the coming years remains, however.

Construction of an industrial manufacturing hub in Perth’s south appears the most likely big-ticket project on the horizon, given Labor’s commitment to it at the most recent state election.

Even that comes with challenges for policymakers seeking to build the requisite framework for an industry on the decline nationally since the 1960s.

Ms Lockwood, who stated a preference for leveraging existing infrastructure where possible, explained that existing technologies and innovation would become integral to these conversations in the years ahead.

“We’ve got a lot of strength … particularly in the automation area, coming out of the resources sector,”

Ms Lockwood told Business News “How do we leverage that back into the more traditional area of manufacturing to give us an edge in the world that means we can be competitive, even though our labour costs are still going be high?”