A local power generator majority owned by Rod Jones’s Hoperidge Capital has refinanced its bank debt through a $44 million bond issue which the company believes will give it more flexibility, including the potential to pursue a 100-megawatt solar farm. 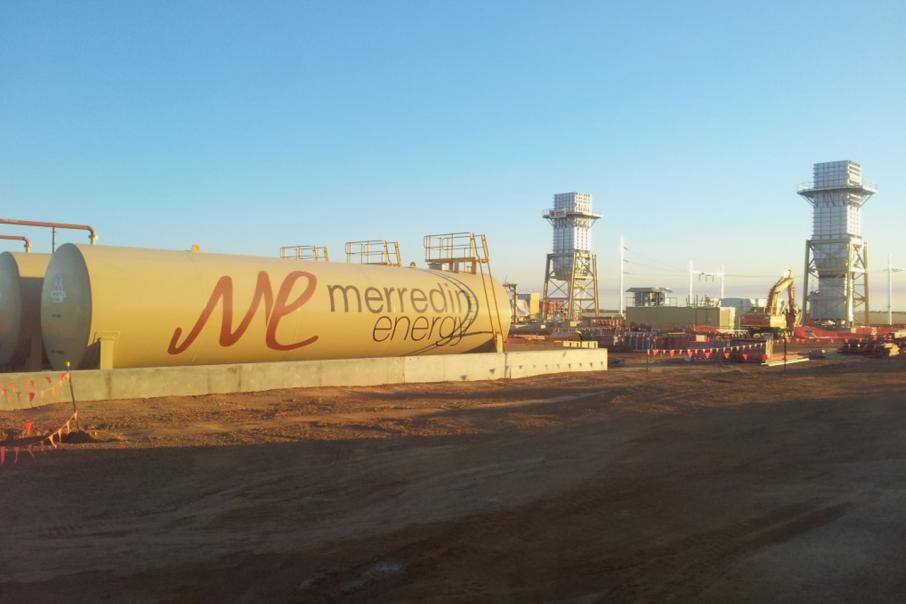 Merredin Energy's peaking plant when it was under construction.

A local power generator majority owned by Rod Jones’s Hoperidge Capital has refinanced its bank debt through a $44 million bond issue which the company believes will give it more flexibility, including the potential to pursue a 100-megawatt solar farm.

Merredin Energy operates an 82MW diesel peaking power station in the Wheatbelt, which can be turned on or off rapidly to match changes in electricity demand.

The company is 53 per cent owned by Hoperidge Capital, the investment vehicle of Navitas founder Mr Jones, with the remaining stake held by Sydney-based money manager Palisade Partners.

The $44 million bond issue was managed by FIIG Securities.

Merredin Energy chairman Jon Biesse, who is also chief investment officer at Hoperidge, told Business News the company was more confident about the state’s electricity market than it had been in some time.

“It’s been a rough period of time in the market here (Western Australia), just driven by the regulatory issues and the regime,” Mr Biesse said.

“This year, the (state) government is finally starting to say the right things, just things that make sense to competitive industry and a commercial environment.

“We’re feeling the most optimistic that we've felt about the structure around the (WA wholesale electricity market) that we have for years now.”

One example was Energy Minister Ben Wyatt’s move to delay the introduction of auctions in the reserve capacity market, which are now at least four years off.

Mr Biesse said the auction concept was unworkable given government-owned generator Synergy’s dominance in the market.

He brushed off concerns from some quarters about the federal government’s national energy guarantee policy, saying the business never relied on government subsidies when determining the commerciality of projects.

Although Synergy’s recent move to grow its stake in the renewables market may create a risk, Mr Biesse said that too could be managed with a power purchase agreement, while some financiers were quite happy for projects to sell into the day-to-day market.

But importantly, the government seemed keen to listen to independent power providers after what had been a tough few years for many players, he said.

Mr Biesse said Merredin would be weighing up two projects, a solar farm of between 50MW and 100MW, or a doubling of its diesel generation capacity to 164MW.

A new diesel peaker might be the most natural move, he said, yet a broadening into solar generation had interesting potential.

“There’s a lot of spare land (at the existing facility),” Mr Biesse said.

“We think that the combination of the peaking power station and the solar farm brings more stability to the network.”

The company is in preliminary feasibility stage for both projects, with a new generator at least two years off if the company approves it next year.

At least 10 other privately-backed renewables projects are under consideration in WA, including Sun Brilliance’s 100MW solar generation station planned at Cunderdin.

The secured note carries fixed interest of 7.5 per cent.

“This style of financing is becoming more popular,” he said.

“We put that in place effectively in a couple of weeks period versus three months when you do it with a bank.

“Non-bank lending is an increasingly viable option for companies.”

FIIG Securities head of debt capital markets John Ricciotti said there had been strong interest from investors in the raising, including in the WA market.

“Bonds exposed to the infrastructure sector provide investors with a solid value proposition due to the strength in cash flow and asset longevity,” he said.

“Bond funding is a capital solution that provides a company more flexibility over terms than bank debt, allowing organisations to take more control over operations and growth opportunities.”