Mermaid Marine Australia employees at the Dampier Supply Base will stop work on Wednesday for five days, while negotiations continue around wages and job security. 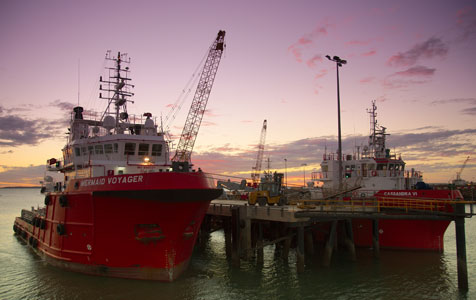 Mermaid Marine Australia employees at the Dampier Supply Base will stop work on Wednesday for five days, while negotiations continue around wages and job security.

The proposed action involves supply base workers covered by an enterprise agreement with the Maritime Union of Australia.

The announcement follows two instances over the past three months where the Maritime Union lodged the intention to strike, only to withdrawn their notice days later, citing continued efforts from both parties to reach an agreed outcome.

The negotiations over recent months are based on attempts to achieve market-competitive wages and conditions and long-term employment security for supply base employees.

Mermaid Marine said the proposed action would not directly impact the company’s slipway or vessel and international operations.

The rally was held outside the Australian Mines and Metals Association Skilled Migration Conference, which was attended by Assistant Immigration Minister Michaelia Cash.

The Maritime Union of Australia and Australian Maritime Officers Union challenged the determination, however the challenge was thrown out by the Federal Court

The protest came a day after the Federal Court's decision, with Justice Robert Buchanan adding that the argument put by the unions was “a powerful one”.

Mermaid Marine shares were down almost 2 per cent to $1.87 at close of trade.