Mermaid Marine says its trading performance will be weaker than expected with a number of key projects pushed back to the second half of the year. 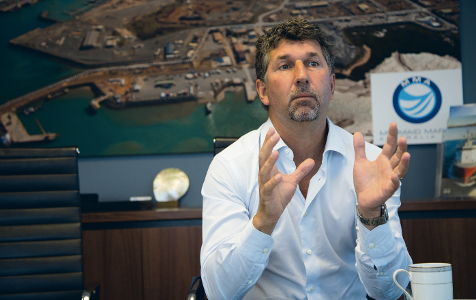 Mermaid Marine says its trading performance will be weaker than expected with a number of key projects pushed back to the second half of the year.

The company said today it expected to deliver a full-year net profit after tax in line with the $60.3 million it notched up last financial year.

Activity at the company's Dampier supply base wharf has been around 30 per cent below anticipated volumes, which Mermaid attributed to the deferral of contracted vessel-related work and offshore construction work into the second half of FY14.

More than 60 per cent of the company's anticipated earnings are expected to be weighted to the second half of FY14.

Despite this, Mermaid said its Dampier slipway business and its Broome supply base, a joint venture with Toll, were trading in line with expectations.

The company expects project activity to ramp up in December as two additional drilling rigs commence off Dampier.

Mermaid's earnings will be further bolstered when a $100 million contract with Subsea 7, to provide nine tug-and-barge sets to support subsea installation works for Chevron's massive Gorgon project, begins to operate next year.

The company's purpose-built Mermaid Leeuwin platform supply vessel is also expected to contribute to second-half earnings when it is completed in December.

"Timing of project commencement is always a challenge in balancing supply base and vessel utilisation but construction activity going forward remains strong with work scopes associated with Icthys, Wheatstone and Prelude still to commence through FY15 and beyond," the company said.