SPECIAL REPORT: The disability sector may have no choice but to heed calls for mergers if the National Disability Insurance Scheme comes to WA. 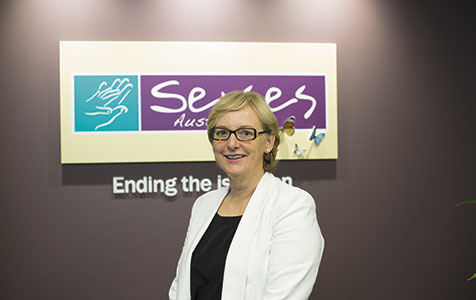 COOPERATIVE: Debbie Karasinski says she’s been trying for years to increase collaboration, but the NDIS may finally make it a reality. Photo: Attila Csaszar

The disability sector may have no choice but to heed calls for mergers if the National Disability Insurance Scheme comes to WA.

“There has been a growth in not for profits and I do think that sometimes we, on the receiving of the requests, are seeing a lot of repetition, Ms Farrell, Rio’s global head of health, safety, environment and communities, said.

“There’s a classic case of a town in the Pilbara that had 17 youth initiatives and there were 26 teenagers in their town.

“One of the things I would be saying to small and medium not for profits is, can you buddy up with someone that’s got a common purpose or direction?”

The frustration is not unique to global corporates such as Rio Tinto, with deputy chair of the Independent Living Centre WA, Melissa Bramley, echoing Ms Farrell’s views.

“We see a lot of not for profits that are very similar and I don’t understand why they just don’t merge … there’s a lot of doubling up in paperwork, back office support, and a lot of them are very similar,” Ms Bramley said.

Benefactors have long been calling for NFPs to increase the level of collaboration and to merge, but it appears the calls have become louder alongside a burgeoning charity sector.

Under the federal government’s National Disability Insurance Scheme, providers will be paid in retrospect of service provision, rather than in advance as is currently the case.

The NDIS is being trialed alongside the WA state government’s own version, My Way, the latter which would retain the current advance payment arrangement and need for strong relationships between the Disability Services Commission and service providers.

If the NDIS is adopted, which many are anticipating, it would significantly change how service providers operate by requiring them to attract business directly from clients.

“Under the current and old way of doing business our biggest customer was the government; in the new world the people with disabilities will choose who they want, and with that some organisations will go under,” she said.

“Hopefully there will be more interest in [merging] going forward because clearly, with all of us generating income from the general public, you’d like to think that if you collaborated more there would be more money to go around.”

“If you look in the disability space there’s something like 116 funded agencies. In a population the size of Perth that’s just ridiculous,” he said.

Mr Trewern said the prospect of the NDIS had forced Nulsen to look in the mirror and identify its point of difference – a process he said had been rewarding and strengthened its business model.

“We’re in for a rough ride in the future, but I think being able to look internally at what the marketing point of difference is has been really positive,” he said.

Mr Trewern said Nulsen was already involved in a significant amount of work delivered in a collaborative manner with other organisations, such as Rocky Bay.

Standing in the way of any proposed mergers is the often-protective nature of those who run NFPs, many of whom are pursuing deeply personal missions.

In addition, Ms Karasinki told Business News, merging with a fellow organisation was never as simple as it appeared.

Senses itself is the result of a merger between the WA Deaf Blind Association and the Royal WA Institute for the Blind, in August 2001.

Ms Karasinski said the organisation had since been actively discussing subsequent mergers over the years but none had come to fruition, despite one particular opportunity that appeared promising.

“The organisation that came to us had a very big client group; on the surface it looked like it was similar to us, but it was actually nothing like us when we did the due diligence,” she said.

Other merger negotiations had also fallen through because of unrealistic expectations about the outcome – often due to the aforementioned protective nature within the sector.

“Another organisation that we were talking to was saying things like ‘no redundancies’... we had two chief executives for a start so we sort of said ‘hang on’,” Ms Karasinski said.

“The primary reason we were looking at that merger was the drive for improved efficiencies and economies of scale.”

Ms Karasinski said the idea of collaboration, in the very least, was valid.

“It doesn’t have to be a traditional merger. I’ve spoken to a couple of smaller organisations about the possibility of still having two boards, but merging corporate services and things like that,” she said.

“But clearly I wasn’t a very good sales person because I couldn’t get any of them to agree.”

Lotterywest chief executive Jan Stewart said the agency had discovered that simply getting organisations together to discuss possibilities was the best way to facilitate collaboration.

“I’ve had some really interesting experiences, such as calling a range of organisations into a meeting and saying ‘here’s a pool of money, you’re going to have to work out how you’re going to share it’,” Ms Stewart said.

“We did that once with a group of medical researchers, it took them two years to work out how they were going to share it, but they did in the end.”

Ms Stewart was of the same view as Ms Karasinski that full mergers were not necessarily the answer.

“Talking about merging is probably problematical in the first instance, it’s more about how they’re going to get together and share services,” Ms Stewart said.

“We have no hesitation when we get similar groups come to us; we just call them in and say ‘we’ve got to talk about this together’, and we’ve had some success. We’ve not tried to choose between them, we’ve actually tried to bring them together.

“I think we’ve got to keep doing that because there isn’t enough money to support all these organisations.”

In the federal budget handed down this month, Treasurer Joe Hockey allocated $55 million (over two years) for WA to trial its My Way scheme in parallel with NDIS trials.

WA is the only state not to have agreed to a full-roll out of the NDIS.

If WA were to agree to implement the federal government scheme, the state would be allocated $46 million to prepare for a full-roll out in 2019.