Our annual Well@Work feature discusses the need for health and wellness programs for employees, the trend in injury rates in WA, mental health among FIFO employees and how not-for-profit groups have recognised the importance of workplace wellness. 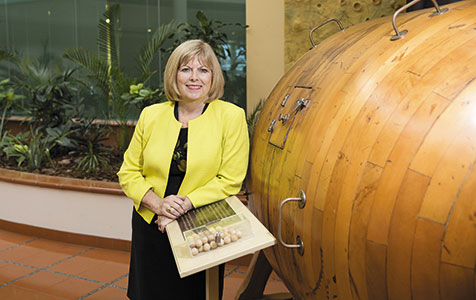 The evolution of workplace wellbeing has brought mental health to the fore, but those who fail to address the issue could be at legal risk.

Jan Stewart is no stranger to stress and anxiety. As chief executive of an organisation now handling more than $800 million in annual revenue, she’s had more than her fair share of sleepless nights.

“I think as a chief executive you probably can’t do your job if you’re not anxious some of the time … if you’re not then you’re not noticing what’s going on,” Ms Stewart told Business News.

Ms Stewart said it became apparent not long after taking the role at Lotterywest (nearly 23 years ago) that she would need to actively manage the way the demands of her role affected other parts of her life.

“I remember early in the piece when I was really trying to come to grips with this job, somebody said the most important thing a leader has to deal with is their anxiety and how they’re going to hold their anxiety,” she said.

“For me this is a constant challenge that comes and goes; you might be in a really good place and think everything’s going really well and then all of a sudden something will happen out of left field and you’ll be blindsided.”

For the most part, Ms Stewart has managed to hold those anxieties at arm’s length; she recognises they are there, but they don’t consume her thoughts.

“I read a lot of philosophy and about Buddhist philosophies, which have really helped me put perspective on things,” she said.

“I think the literature on mindfulness that’s become very popular lately, although it’s been around for a long time, is really important.”

Ms Stewart also has a background in social work, giving her a personal understanding of mental illness, which has been useful leading a workforce of almost 200 employees.

According to ABS statistics, if the Lotterywest workforce was a microcosm of Australian society overall, 40 would struggle with a mental health issue of some degree every year.

Research on the impact of mental health issues on business shows that, in Australia, ‘presenteeism’ (being at work but not engaging), absenteeism, compensation claims, and staff turnover resulting from mental illness costs employers anywhere from $10.9 billion to $14.8 billion every year.

A PwC study, published in March, found the prevalence of mental health issues varied across sectors; financial services and the insurance sector were the highest with a rate of 33 per cent of employees experiencing issues in a 12-month period.

The PwC study also estimated that, if employers were to implement strategies to create a mentally healthy workforce, every dollar they invested would bring a return of $2.30.

In certain industries the return is thought to be even greater.

For example in the mining, public utilities and public administration sectors, every dollar invested in creating a mentally healthy workforce is thought to bring a return of $5.70.

As an employee of the City of Wanneroo, Jonathan Miles said the struggle of managing his depression was alleviated by managers who made an effort to speak with him and understand his needs. Mr Miles was first diagnosed at the age of 21 after his employer at the time sat him down and raised the issue head on.

“My boss was there and I pretty much just broke down and she said ‘you’ve got to get to the doctor’,” Mr Miles said.

“At that stage I was pretty much in tears at work, which isn’t something you tend to do very often as a 21-year-old male.”

The illness has intensified at various times since the diagnosis, with one particularly bad episode earlier this year.

But Mr Miles, who is also a speaker for mental health advocacy group beyondblue, said a supportive work environment made a significant difference, as he was able to take time off to focus on his mental health when needed and opt not to take on projects that may be particularly stressful.

As anecdotal evidence emerges to suggest an emerging emphasis on improving worker wellbeing, employers are becoming more aware of the importance of mental health and attempting to broach the issue in everyday conversations.

She said employers realised the cost to replace an existing employee was much higher than putting systems in place to help them manage their condition.

However, Ms Broomhall said employers that hadn’t addressed mental health issues and who didn’t know how to approach the topic were often putting themselves at risk from a legal perspective.

“Employers do have legal obligations in the workplace and they do have to ensure that their managers are operating in the appropriate way in that regard,” Ms Broomhall told Business News.

One of the core responsibilities of an employer under anti-discrimination law is making what’s termed ‘reasonable adjustments’ for employees with specific needs in regards to mental health.

“Privacy is another really big issue; [there’s a question] of ‘if I’m an employee and I disclose this in my workplace, does it just become gossip fodder?’ It absolutely can’t,” Ms Broomhall said.

“We’ve seen organisations where unfortunately it has, and it’s incredibly distressing to the individual.”

The issue of disclosing mental health issues in the workplace raises various opinions on whether it’s appropriate or necessary.

On one hand, mental health advocates are pushing for increased conversation in a bid to break down the stigma and continued lack of understanding.

Examples of leaders who have spoken out are by and large limited to the public sector with mental health commissioner Tim Marney and former politicians Troy Buswell and Geoff Gallop among the few who have spoken publicly of their own experiences.

Ms Broomhall said it was understandable that leaders in the private sector were cautious.

She said some of her clients felt that disclosing mental health conditions could work against the intention of encouraging employees to speak out, if it gave the impression such struggles were limited to people in high-pressure roles, or could only be managed with significant resources.

However Mr Miles said it was important for leaders to take the lead in discussing mental health – both from a personal perspective but also as duty of care for employees.

“Those conversations could be the trigger for someone getting the help that they need,” Mr Miles said.

“You always look to your leaders, if you see your leaders taking a proactive role you’re much more inclined to follow.”