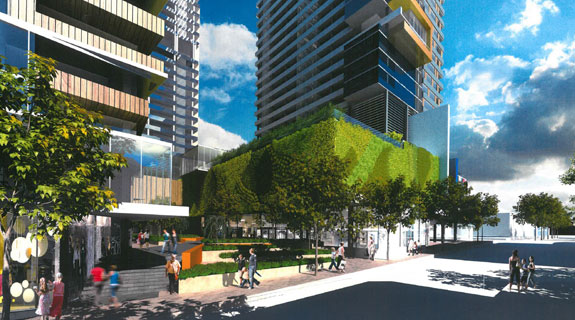 A public plaza is a feature of the triple tower project slated for the Megamart site.

An apartment building which would become Perth's fifth-tallest tower is set to win planning approval next week, part of a mammoth three-tower residential development slated for the old Megamart site on Beaufort Street.

It has been recommended to be approved by the City of Perth development assessment panel when it meets next Thursday.

The first stage, a 52-level building to be known as Beaufort Tower, will comprise 350 apartments and top out at 149.5 metres.

The tower would be Perth’s fifth-tallest building, only eclipsed by Central Park, Brookfield Place, 108 St Georges Terrace and QV1.

The second stage comprises a 27-level building, called Stirling Tower, containing 144 serviced apartments on the north-eastern portion of the site, adjacent to the corner of Stirling Street and James Street, while the third stage, Roe Tower, will be a 42-storey, 350-apartment building fronting Roe Street.

Roe Tower is slated to be 122.5 metres once complete, which would make it Perth’s 10th-tallest building. An artist's impression of the project from Roe Street.

Also included in the project, designed by HASSELL and Fender Katsalidis Architects, is a public plaza and pedestrian links to help activate the surrounding area, as well as a total of 4,853 square metres of commercial space.

A creative industries incubator has also been proposed on the ground and first floors of the Stirling Tower.

According to DAP documents, EG’s design is considered to be appropriate for the site, while its significant community facilities, including the public plaza, would increase activity both during the day and after-hours in the area.

The project received one objection, from Court Hotel owner Bree Maddox, who maintained the development would have a potential adverse impact on the long-standing watering hole.

The Court is licensed to be open until 2am on weekends, with its outdoor beer garden often hosting live music acts.

Ms Maddox’s main concern is the potential that complaints from an influx of residents in the apartment towers would result in restrictions of the hotel’s extended trading permits.

However, the DAP documents said Ms Maddox must accept responsibility for minimising noise impacts as well as anti-social behaviour, while changes to the pub's operation might be inevitable as the precinct is redeveloped.

A previous approval for the site comprised a mixed-use development, also over three towers, with the largest being 27-storeys.

Perth City Council amended its planning scheme in October last year to enable each building on the site to be contained on a separate freehold lot to assist in the financing and management of the development. The triple tower project would be a significant addition to the north-eastern edge of the CBD.