Population growth is slowing, but Perth is still expanding and the challenges of a maturing city mean land developers are in for another busy year. The annual Special Report also includes an updated list of WA's biggest land developers. 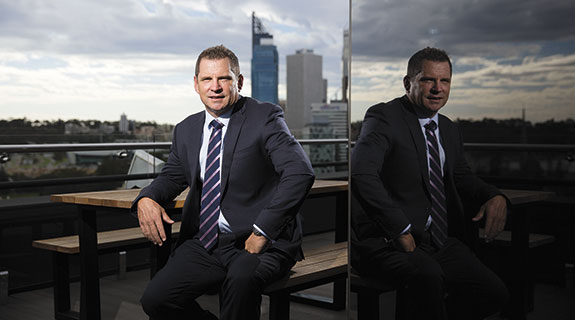 Population growth is slowing, but Perth is still expanding and the challenges of a maturing city mean land developers are in for another busy year.

For more on our Land Developers feature see the Special Report.

Developers are hoping 2015 will be the year they finally catch up with demand for residential land in the metropolitan area, but while the market is moderating, competition will be fierce to win sales from a smaller pool of potential buyers.

To describe the past few years as hectic for land developers would probably be an understatement.

During that same period, developers created 14,995 freehold lots in the metropolitan area, according to figures released by state government agency Landgate.

At the same time, private sector building approvals for detached houses in Perth were 14,816, Australian Bureau of Statistics data showed, while the number of dwellings commenced reached 21,754. 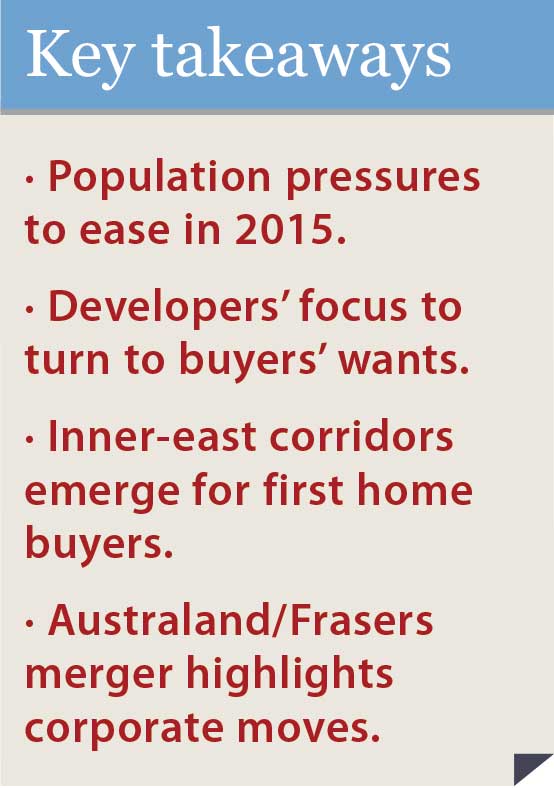 Those figures would suggest considerable pressure is being placed on land developers to roll out enough lots ready for building to meet housing demand, even though around 25 per cent of those approvals and approximately 14 per cent of the starts in 2013-14 were apartments.

So while population growth is expected to slow to 2.2 per cent this year, for a land development industry playing catch-up there are still considerable challenges in finding space to house an extra 55,000 people in 2015.

Department of Planning director general Gail McGowan told a recent Australian Property Institute forum that, while the reduced rate of growth would enable the industry to take a breath, Perth’s planning framework still needed to be optimised to allow the city to grow to 3.5 million people by 2050.

“Business as usual is not an option for us,” Ms McGowan said.

“We’ve got a Perth and Peel region that stretches well over 125 kilometres from north to south and we’re experiencing some real pressures in a range of areas.

“We have ageing or inadequate infrastructure, we’ve got environmental pressures, we’ve got the availability of raw materials such as sand, just to name a few things.”

Mr Gore said yearly population growth of more than 80,000 resulted in unhealthy market fundamentals and it was consumers who wore the pain – in any number of ways.

“You only had to look at the freeways, congestion and all those type of things to tell you that the growth in infrastructure wasn’t keeping up with the rate of population growth,” Mr Gore told Business News.

“If we had continued at 88,000 then the supply side was not going to meet the demand side, then you get the boom-bust cycles, which is not in anyone’s interest, and it becomes unaffordable as well.” Stockland WA general manager Col Dutton said the slowdown from the historical peaks, albeit to above long-term average levels, would likely result in a better outcome for land buyers, primarily through a reduction in the amount of time land transactions took.

“Through that peak we’ve been through, the time from purchase through to customer settling was being extended because of the availability of stock,” Mr Dutton said.

“The market across the board has been very production-focused, and I think it will become more customer and product-focused as we come off the peak.”

But in addition to the slowing population growth, sales may be slower over the next year because buyers will take more time to decide on which community they would like to buy into, rather than having the pressure that they may miss out if they don’t act quickly.

“The availability of home sites on offer, and the increased use of digital technology to explore options, means buyers are becoming more discerning with their choices and paying more attention to the quality of the community, whether that is location, affordability, amenity or sustainable design,” Mr Lawrance said.

“A lower level of sales doesn’t necessarily mean that everything’s bad, but there’s no doubt that the banks will continue to tighten up on finance and focus on the more traditional, experienced developers,” Mr Hector told Business News.

The south-west growth corridor emerged as the most popular choice for home buyers in 2014, with a total of 2,690 land sales in the year to the end of September, according to statistics compiled by the Real Estate Institute of WA.

The REIWA statistics showed the first-home buyer hotbed of Baldivis was the region’s most popular suburb, with 748 land sales at a median lot price of $215,000.

“There were quite a lot of land parcels down there, so that was good opportunity for most of the development community to get a presence down there,” Mr Sadleir said.

“Settlers Hill was the first major development, but then as the freeway extension went through a lot of others capitalised on the availability of land.” Byford, in the south-east corridor, was the second most prolific suburb in terms of land sales over the same period, with 581 lots sold.

The south-east, where 2,018 lots were sold, also includes Piara Waters and Harrisdale, suburbs that have helped make the City of Armadale the fastest growing local government area for the past two years.

City of Armadale Mayor Henry Zelones said residential development was occurring at such pace in the region that a new street was being created each week.

Also in the south-east, relative newcomer to Perth’s residential land development sector, Golden Group, launched the first stage of its 3,750-lot Whitby project in the Shire of Serpentine-Jarrahdale in July last year, a move that placed it at seventh on the BNiQ ranking.

Golden Group managing director Andrew Sugiaputra said the company’s strategy at Whitby was to compete aggressively on price, while also providing a good range of different housing lot options, which had resulted in the developer performing strongly on the sales front since the project’s launch.

“A lot of people have also been asking for lots between 500 square metres and 550 square metres, so that’s probably another factor why we’re selling more lots compared to our competitors, because we are providing larger lots than what they’re offering.”

Alkimos was the strongest-selling locale in the north-west corridor, with 579 sales at a median price of $279,000.

Further north at Two Rocks, the Capricorn Village Joint Venture launched what it described as the most affordable beachside suburb released in Perth for more than five years in September, with its Atlantis Beach estate.

Atlantis Beach, which is project managed by Acumen Development Solutions, has approval for more than 5,800 lots, with house and land packages starting at $297,500.

Ellenbrook remained the fastest-growing locale in the north-east, even after 20 years of continuous development, with 382 land sales, while Aveley was close behind, with 344 lots sold at a median of $205,000.

Mr Dutton said the continued growth, especially in the eastern corridors, was a distinct sign of Perth maturing as a city.

“Both of those corridors in fact have become more popular over the last three to five years, while the coastal north-west and south-west have always been popular,” he said.

“Those inner corridors have great amenity, great facilities, great access to motorways and things like that, so it’s just a natural maturing of Perth for them to become more attractive.”

While the roll out of land continued at pace, there was also plenty of action in the corporate arena among developers.

The departure of national developer Australand from the ASX boards following a $2.6 billion takeover by Singapore’s Frasers Property was the most prominent corporate deal in 2014.

Australand WA residential general manager Tony Perrin said the companies were currently working through an integration process to determine the future direction and branding of the businesses, a process he expected would be finalised by the middle of the year.

Mr Perrin said the companies were already quite similar, however, in that both had a business model that was a hybrid between land development and high and medium-density housing.

“We see close synergies, Frasers WA is represented by Frasers Landing subdivision in Mandurah, along with the Queens apartment development in East Perth, while Australand already has extensive subdivision experience and has recently completed selling130 apartments in East Perth” Mr Perrin said.

“Frasers' product offering targets a different type of customer, but consolidated we’ve got experience in executing development in the city core, city fringe, infill and outer suburban markets, across all forms of residential development.  This is quite a unique position as most WA residential developers are either pure subdivision or apartment focused.”

Australand was not alone, however, in making a significant splash on the ASX.

Peet also had an active 2014 on the corporate front, launching a significant capital raising in November to contribute to a suite of six residential development project acquisitions worth a collective $95 million.

The raising comprised a $40 million institutional placement priced at $1.11 per share and a share purchase plan, which raised $4.35 million from existing shareholders, at the same price per share.

The WA assets acquired by Peet included a 50 per cent stake in the Golden Bay estate, which it secured in joint venture with the Future Fund, and two medium-density sites within the town centre of one of its existing Perth projects.

Another asset included in the acquisitions was made in joint venture with builder ABN Group, with the companies purchasing a parcel of land in Midvale with the potential to yield 600 lots from the Department of Housing for $18 million.

At the time of the transaction, ABN Group managing director Dale Alcock said the deal was indicative of the increasingly early collaborations between developers and builders on major land subdivisions, designed to help boost affordability by maximising the potential yield of land parcels.

Near Piara Waters, Stockland spent $30 million on a 27.7ha plot of land it expected would add a further 500 lots to the existing 2,100-lot estate.

At the same time, Stockland bought a 38ha parcel of land at Brabham, adjoining its 1,353-lot Whiteman Edge estate.

The land, bought from the Department of Housing, will yield around 570 homes, as well as three large lots the developer is planning to retain for medium-density projects.

Mr Dutton said the acquisitions were in line with Stockland’s long-standing strategy of consolidating land around existing developments.

“We put a lot of work into the front-end planning and getting the plan right,” Mr Dutton told Business News.

“When there is a neighbouring consolidation, it helps us deliver that because it’s just added another stage to that community.

“Those are obvious opportunities and we look for those all the time.”