Technology will be at the forefront of changes in the workplace in the near future, but an economy-wide shift in attitude is needed. 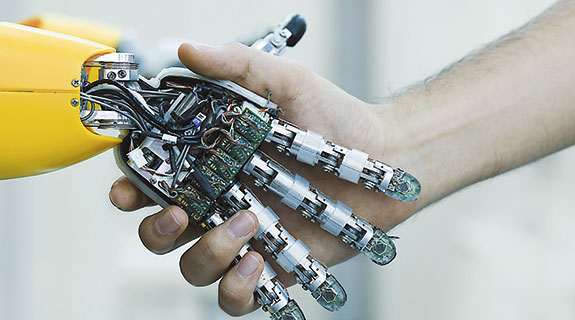 Technology will be at the forefront of changes in the workplace in the near future, but an economy-wide shift in attitude is needed.

Last month, for Christmas, I bought my son a robot.

I purchased a basic do-it-yourself kit, which required the robot to be put together and programmed, both challenging tasks for the uninitiated but ultimately the core reason for the gift – to learn from the ground up.

In proof that the apple doesn’t fall far from the tree, this reminded me of numerous presents my father had given me during my childhood, many of which I had no interest in.

Perhaps that interest simply required maturity, because this time round I found myself devoting many hours to building the little machine, installing software and learning how to make it do some very rudimentary activities.

While not a complex device by any means, there was a real sense of achievement when I managed to make it follow basic instructions after experimenting with some code.

As much as I am slightly hooked on learning the next phase, the reality is that the robot was not about me – it was for my child. While it is hard to pick what the future has in store, I believe two things will greatly influence the careers of the next generation and, potentially, pave the way for a manufacturing revival of sorts in developed nations such as Australia.

One is robotics technology, which is becoming much cheaper and, therefore, more adaptable to needs beyond manufacturing giants such as carmakers. Robots are not just there to make things, though that will help us on a small scale. They will also be machines that do certain functions in business and at home, freeing us up to do more cerebral work – like thinking up the next robot task.

The key is that it is bespoke and local. I ordered the robot online from a Perth business, put it together and programmed it myself. Admittedly, it has just entertainment and educational value for now, but there is nothing stopping me from devising programs and adding accessories to make that microcircuit do things that its designers never imagined.

That brings me to the second part of my view of the manufacturing future – 3D printing. The next step for my children, if they are interested, and me is to learn about making things with this technology, which is also rapidly scaling down in both price and size.

At Scitech a couple of years ago, I saw quick cheap 3D printers making chess pieces and even working parts out of plastic. Again, much of that is simply frivolous entertainment, but they were also snapshots of the future.

When I heard about a man making a titanium heel from a 3D printer to replace his cancerous bone, I thought that the future was with us. Of course body parts remain a medical speciality, but outside health there are many things we can do with our creative powers by designing objects that can be printed locally (or anywhere in the world that the user resides).

Perhaps my future robot has parts that my future customers can print at home. Maybe these hypothetical customers will then download my software, which allows them to undertake a task unique to them (and maybe only a relatively few others). Niche markets become profitable at a global level, as many an app creator has learned.

Clearly I hope that some of this small-scale manufacturing will evolve to mean more than just countless backyard operators, although I am not opposed to that trend. Small factories and small workforces may result if our creatively requires production that can’t be managed efficiently at home. For instance, while it’s possible a car could be built from a small home-based 3D printer, bit by tiny bit, who wants to wait the five years for it to be completed? Larger, specialist items may well be produced by small-scale factories around the world, as design benefits defeat the economies of scale of big factories in some cases, leaving that sector to handle commoditised manufacturing.

I think Western Australia could benefit from that, but as a nation we need to live through the transition away from large-scale manufacturing – which happened in WA long ago and is now sweeping through the manufacturing centres of the east in sectors such as cars and ship building.

However that is just a view and I may not be right, or entirely right. What I would not want to see happen is anyone make it a policy; I just hope government steps out of the way if such a trend occurs rather than fighting change to protect traditional industries (like it is battling Uber in favour of our taxi service).