Deloitte, BGC and FIFO Families have delved into the world of virtual reality technologies in an attempt to break down the distance barrier for families with parents who are fly-in, fly-out workers. 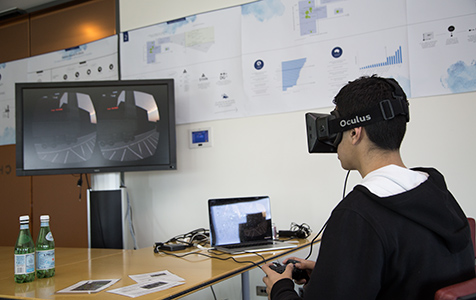 Deloitte, BGC and FIFO Families have delved into the world of virtual reality technologies in an attempt to break down the distance barrier for families with parents who are fly-in, fly-out workers.

Using research led by Curtin University, Deloitte is investigating how immersive technologies can help FIFO workers share their experiences with their families, as well as improve employee safety while on site.

One such technology is the wearable device Oculus Rift, which is being developed by a US company, Oculus VR.

Deloitte partner Coert du Plessis said using Oculus Rift, which is worn like goggles and allow a person to experience a virtual scenario as if they were living it, provided memorable experiences.

“The training, even though we’ve invested really heavily, actually was counter-productive. People who got injured had done significantly more ... safety training,” he said.

“So that started the journey of how to make this training stick.”

Curtin University’s David Gibson said people learned more and retained information longer if they were engaged in a physical, emotional and cognitive way.

“In this virtual world, basically you get all three of those things,” Professor Gibson said.

The potential opportunities, especially for young children to understand what their parents do, was exciting, FIFO Families founder Nicole Ashby said.

“(A FIFO worker) can spend up to 75 per cent of their working life away on site, so if their family can understand that it enhances better relationships and greater connection,” Ms Ashby said.

“Because this learning is so immersive, a really good way to get that safety message across is to have the family involved.”

Curtin University senior lecturer Torsten Reiners said Curtin was investigating other virtual reality technologies, including systems that could be used on a mobile phone.

“We are not focusing on the Oculus necessarily, there’s more technology coming out,” Dr Reiners said.