Medicos meeting a need in Africa 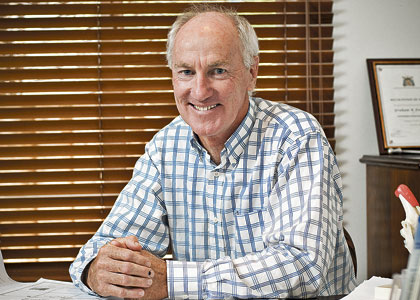 MOVING FORWARD: Graham Forward established Australian Doctors for Africa in 2005, and his wife and father are two of the 40 volunteers associated with the organisation. Photo: Grant Currall

GRAHAM Forward has an unassuming nature and natural modesty that belies the depth of his connections to, and achievements in, Africa.

Dr Forward has maintained strong connections to Africa since his first visit to Ethiopia in 1981, so it was no surprise that, following the Boxing Day tsunami in 2004, contacts affected by the disaster (in Somalia) requested his help.

In response, he established Australian Doctors for Africa, which now provides orthopaedic support to hospitals in three African countries.

“My wife and I have always been involved in Ethiopia, we have four adopted kids from Ethiopia,” he said.

The organisation’s charter is focused on going only where ADFA is invited and providing culturally aware and sensitive assistance.

“We are there to give a hand, not to take over or impose our will or agenda on people. It is more or less to respond to people asking us to help them as much as we can,” Dr Forward said.

ADFA now operates in Somalia, Ethiopia and Madagascar and its services have expanded beyond sending medical and surgical volunteers to now include training of local medical staff, the supply of medical equipment (it has sent 17 containers to Africa) and upgrading hospital facilities.

The theatres will be created through a $300,000 conversion ($215,000 of which has been already been raised) of what is currently an unused third floor teachers’ room in the hospital.

The operating theatres will be fitted with $1 million in equipment, sourced separately to the funding for the conversion.

Each year the organisations makes two fortnight-long trips to the five hospitals it is involved with and, with a team of up to seven medical staff including anaesthetists, surgeons and nurses, treat between 200 and 700 patients and perform up to 120 surgeries – a number three to four times higher than what would typically be achieved with the same sized team in Australia.

Given orthopaedics account for one third of a large hospital’s work, ADFA’s work is notably making a difference.

While ADFA is hastening to add any more locations to its service areas so as to focus on delivering quality services to its existing partner hospitals, Dr Forward’s vision is to create an Australian orthopaedic hospital that teaches Western standardised hospital care within the next three to five years.

“We are trying our hardest to do a good job of what we are doing. The demand for our services is unlimited throughout Africa,” Dr Forward said.

ADFA was recently endorsed by the federal government’s overseas aid program AusAID, and Dr Forward said having accountability systems in place within its African operations, as well as developing trusting work relationships with its representatives on the ground in Madagascar, Somalia and Ethiopia, had been integral in developing practices in the continent, given the corruption that can exist.

Dr Forward said, while the biggest challenge had been to manage the expectations of what ADFA could deliver on the ground (as well as in terms of experience for the volunteers), the greatest success had been witnessing the change effected through transferring knowledge to international medical peers.

“Helping people medically is an international language and it lets you transcend race, culture and religion. A broken leg in an impoverished Somali person is just the same as a broken leg in a wealthy American person,” he said.