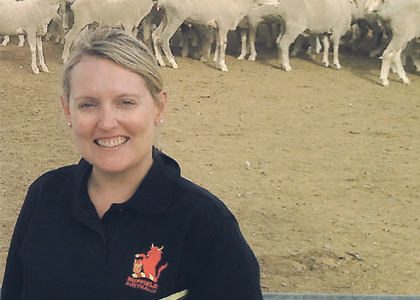 “At the moment (the industry) is in a very dire situation, prices have dropped significantly and people are losing confidence in the industry,” said Dr Manton-Pearce, who has travelled the world searching for insights into how to shape the sector.

“It could potentially get even worse for prices because there’s a lot of product set to come on line from the eastern states where they’ve had a really good season.”

Dr Manton-Pearce has direct experience of the pressures facing the industry through the prime lamb and cropping farm she operates with her husband in Yealering, in WA’s Wheatbelt region south-west of Perth.

She combined this knowledge, and her experience as a research fellow at the CRC for Sheep Industry Innovation for her Nuffield Scholarship, to investigate the demand and supply balance for Australia’s sheep meat around the world

Last year prices for sheep meat reached record levels, however, a large boost to the eastern states flock, combined with the decrease in live export ships arriving in WA have caused prices to crash this season.

“When live exports came to a standstill after the Pakistani incident, prices dropped by 50 per cent, and for WA producers about $50,000 to $60,000 was wiped off their bottom line,” Mr Murray said.

Five Mddle Eastern countries take around 90 per cent of WA’s live sheep exports. When trade to this market was disrupted, there was a rush to get livestock into the state’s abattoirs.

Dr Manton-Pearce said: “It’s really hard to get space in an abattoir at the moment and producers are having to wait until February to get their sheep in, because all these sheep are supposed to be going on boats.” However, there are other markets for chilled and boxed meat, mainly the United States, the European Union and China.

While the growing Chinese middle class represents a huge opportunity for WA producers, imports are subject to tariffs.

“China is a huge market and there are estimates that demand for sheep meat could increase by 50 per cent over the next five years, which is huge when you consider their growing middle class will have the ability to pay for it,” Dr Manton-Pearce said.

“But tariffs are set at 15 per cent, whereas New Zealand has just signed a free trade agreement with China, so their 6.7 per cent tariff will go down to zero in 2015.”

“India for me is a very interesting market, 30 per cent of their population, 300 million people aren’t vegetarian, and the vast majority of those people don’t consume beef,” she said.

Dr Manton-Pearce said only a few of the diseases on the “long-list” compiled by Indian authorities were present in Australia. India’s restrictive quarantine regime is the currently the subject of a US submission to the World Trade Organisation.

Australian imports to the EU are subject to quota of around 19,000 tonnes a year.

Dr Manton-Pearce believes achieving more price stability is essential for the long-term survival of the industry.

“One of the things I’ve learnt in my travels is that fanners aren’t really chasing high prices all the time, they just want a consistent pricing system,” she said.