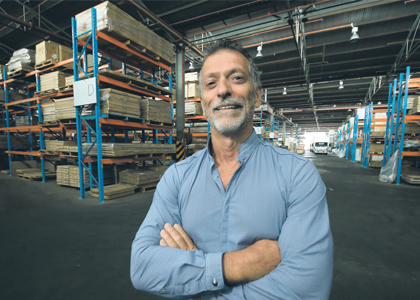 A NEW 8,000-square metre distribution centre built for furniture group McLernons has enabled the company to keep up with increased demand for its flat-packed and transportable office equipment fuelled by the mining boom.

Flat-packed furniture, often assembled on site to minimise transport costs, was “an area of good growth for us”, McLernons chairman Peter McLernon said.

Mr McLernon said he believed it was dedication and belief that helped his business achieve turnover of $25 million last year.

The number plates on Mr McLernon’s car - Motiv8d - sum up the drive he has for his office furniture business.

McLernons was founded in Perth in 2000 and Mr McLernon says it is now is the largest local office supplier in Western Australia.

The company has 60 staff, 17 of whom work at the new warehouse in O’Connor that holds more than 2,000 products.

The McLernons group has four business arms, which include auctioning off secondhand IT and office furniture, manufacturing, importing and installing new office fit-outs and industrial shelving and storage products.

Mr McLernon said WA’s isolation was one of the key reasons the business was able to succeed against national office suppliers.

valued and it was how the company was able to win big contracts with BHP Billiton and Rio Tinto, he said.

Being smarter rather than larger was a key to surviving in a boom-bust economy.

Mr McLernon said the company closed two retail stores, one in Joondalup and the other in Myaree, which led to lower costs but the business was still able to achieve an increase in sales.

He said the remaining stores at Welshpool and Osborne Park were performing well but the company would never expand beyond two stores again in Perth.

An agile business was imperative to be able to respond to changing market conditions.

McLernons achieved this through owning the manufacture, distribution and retail elements of its products. End-to-end control of products gave it the commercial advantage of being able to respond quickly to customers’ demands.

Joining a chorus of business leaders, Mr McLernon said he wanted something to be done about payroll tax in WA, claiming it was the biggest issue facing his business.

“I would like to see the state government scrap payroll tax,” he said.

He also noted the lack of support for local

manufacturing by governments at both the federal and state levels, with no incentives provided to manufacture locally.

McLernons manufactures about 10 per cent of its products in WA, with the rest made in a partly owned factory in China.