As an election year approaches, Colin Barnett finds himself nursing a headache despite not having done the drinking. 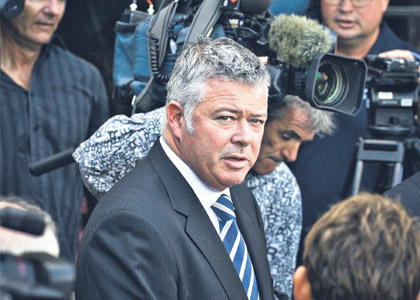 As an election year approaches, Colin Barnett finds himself nursing a headache despite not having done the drinking.

SOMETIMES Colin Barnett must think that he is back at the beginning; that after more than four years in the state’s top job, one of his government’s major problems has still not been resolved.

The ‘problem’ of course is Treasurer Troy Buswell and the fact that he is once more the centre of attention for extra-curricular activities.

This time, however, what started out as the revelation of questionable actions at a private function has developed into the public airing of normally private details of a relationship breakdown.

The fact that the other person is another MP, the former Greens (now independent) member for Fremantle, Adele Carles, just complicates matters.

It’s four years and four months since the Liberal Party decided that Mr BuswelPs term as party leader had to end. He had lasted just six months and 18 days. The powers that be had run out of patience with the exuberant member for Vasse, and decided it was time to revert to a safe pair of hands.

That was the catalyst for one of the great political comebacks. Mr Barnett was prevailed upon to shelve his retirement plans and again take on the party leadership; and it is history that the Liberal-National alliance was cobbled together almost two weeks after the election on September 6 2008.

May 16 2009 was another significant date; that was when Ms Carles won the by-election for the state seat of Fremantle, creating history by becoming the first Green to be elected to the Legislative Assembly.

Ms Carles raised eyebrows when she chose to sit on the blue leather on the Liberal-National side of the assembly chamber. Her explanation? That despite the Greens and Labor generally being thought of as soul mates, neither side should take her vote for granted - it would be cast after assessing the merits of each issue, regardless of how the major parties voted.

Eyebrows were raised again when she was a guest at Mr Barnett’s Christmas drinks for the media at the North Cottesloe surf club. I recall chatting to her and, noting the fact that her presence was a surprise, asked if she felt she was being ‘duchessed’, given the precarious state of the numbers in the assembly.

She replied that it was essentially Mr Barnett being friendly towards the new member of the neighbouring electorate, as her seat of Fremantle, and his of Cottesloe, share a common boundary.

But there was more. Ms Carles returned the favour for her Christinas party, as I observed in a report I wrote for the ABC News website on Christmas Eve.

“Mr Barnett was there, supported by his treasurer, Troy Buswell, and backbenchers Joe Francis and Tony Krsticevic,” I said.

“In fact they matched the Greens contingent. The local member was supported by MLCs Lynn MacLaren and Alison Xamon, as well as Senator Scott Ludlam.

“With the Greens and the ALP traditionally exchanging preferences in elections to the exclusion of the Liberals, the question must be asked: What is behind this new cosy relationship between the Liberals and the Greens?

“Is it because the Liberals feel that with a wafer slim majority with their flighty alliance partners, the Nationals, they might have to rely on Ms Carles’ vote at some stage?

“Or is Ms Carles keen not to upset the Liberals because of some favour she may seek for her electorate? Or is it a breaking out of the Christmas spirit? Or a combination of the above?”

It wasn’t long after that Mr Buswell and Ms Carles struck up a relationship, leading to a chain of events in which he was stripped of his cabinet post and she split with the Greens to become an independent.

The relationship blossomed, and Mr Buswell was eventually recalled from the ‘sin bin’ to rejoin the cabinet as housing minister.

Then, when Christian Porter quit the ministry in mid-year to pursue a career in federal parliament, Mr Buswell was back as treasurer. However the relationship with Ms Carles soured and the two went their separate ways, without any undue publicity.

That was until last week, with the titillating accounts of Mr Buswell ‘dry humping’ a Perth businessman last December at what appears to have been a lively party at property developer Nigel Satterley’s Peppennint Grove home.

Ms Carles says she witnessed the event and that it was the last straw as far as their relationship was concerned. Mr Satterley, the host, says he saw nothing untoward, adding that Ms Carles’ accusation seemed to be that of a “jilted lover”. All very provocative.

The spat between the two politicians is one thing. What is more concerning, again, is the relationship between prominent ministers of the crown and leading businessmen with whom they might be required to deal.

Perth is still a relatively small community and cabinet ministers can’t be expected to live the lives of Trappist monks.

But the easiest trap for naive politicians to fall into is to be compromised. Sure, politics is the art of the possible.

A bit of horse-trading might be required from time to time to get the results that are amenable to both sides of an issue, but dealings need to be appropriate, whether official or unofficial.

The benchmark in questionable relations between ministers and businessmen was set during the Labor years in the 1980s. A number of naive ministers would refer proudly to their dealings with ‘Robert’ (Holmes a Court), ‘Alan’ (Bond), ‘Laurie’ of course (Connell), ‘Dallas’ (Dempster) and ‘ Yosse’ (Goldberg). Occasionally ‘Fatty’ would get a mention (Multiplex boss John Roberts).

It was high-flying stuff - rubbing shoulders with the ‘four-on-the-floor’ types; until it all came a gutser, sparked by the 1987 stock market crash. And taxpayers paid out big time.

Apparently Mr Buswell’s association with Mr Satterley goes back to his pre-politics days when he was president of the Busselton Shire. That’s all well and good.

But Mr Buswell leaves himself exposed when Mr Satterley, who obviously deals with the government as part of his extensive property development activities, publicly goes into bat for him.

Bob Hawke liked a beer or five while ACTU president in the 1970s. I saw him badly under the weather several times; but he went on the wagon when he entered politics in 1980, and his behaviour as prime minister was exemplary. No risk of compromise there.

It’s not too late for the treasurer to take a leaf out of Mr Hawke’s book. Mr Barnett, for one, would sleep better at night.