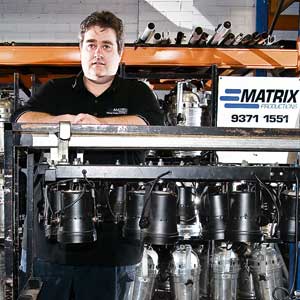 While the entrepreneur has maintained a love for music, he also developed a passion for the logistics of catering for a music event.

The small business, which employs about 20 staff, initially focused on hiring out backline equipment such as speakers and lights, operating from a small workshop in East Perth.

But Matrix soon identified an alternative niche market and within 18 months had expanded its offering to include light shows, predominantly within the music industry.

The company now offers a range of products for sale and caters for the general public by providing a driveway hire and sales service.

It also acts as warranty repair agents for a wide range of products in the industry, providing a technical repair service, as well as service-oriented production work.

"There is definitely more work in this industry now than there was when we started in the 1980s," Mr Edwards told WA Business News.

From the outset, Mr Edwards focused on providing reliable, high-quality service, investing heavily in recruiting and training staff, while providing a flexible working environment that complemented the seasonal type of work of the industry.

Five years after opening its doors, Matrix relocated to its current premises in Bayswater and the business began to expand its client base, catering for concerts in more substantial venues, fashion events, night clubs, dance parties, expos, school functions, and theatrical productions.

In 2002, Matrix became a registered company with the capacity to supply services for 100 events a week, eventually gaining accreditation with the Events Industry Association, a peak body representing the events industry in Western Australia, overseeing quality assurance to customers and suppliers through a strict code of conduct.

Two years ago, Matrix expanded with the acquisition of Pro Design's hire department, which enabled further expansion of the company's equipment levels and client base.

Despite this mostly organic growth, however, Mr Edwards said in April the business began to feel the impact of the global economic crisis and work slowed.

Fortunately, Matrix had a mature-aged employee roster and solid workplace culture, with the staff suggesting all employees take annual leave until work picked up.

"We generally do that anyway, but because of the downturn in the economy they were a bit more proactive about it," Mr Edwards said.

"I think that the guys realised that if they wanted to have their jobs on an ongoing basis, we had to make some quick changes.

"The older guys often realise that the grass isn't always greener on the other side of the fence, and if they're happy they tend to stick around."

To reduce costs during the downturn, Matrix has stopped outsourcing certain jobs and started performing some tasks internally, such as website and leaflet design, and debt collection.

The team then restructured the company's price list to cater for the changing economic climate, while generating leads for potential clients in various sectors Matrix had not been engaged with much in the past, such as the film and televisions sectors.

"So we thought that industry doesn't really know about us so we'll do a price list and do a mail out, and we went around and met a few people and shook a few hands," Mr Edwards said.

"It hasn't brought in a lot of work, but rather than sitting around waiting for the phone to ring, we were just being proactive and so we have picked up a few hires.

"One of our challenges is that people don't recognise they need the services of a company like ours right up until the moment that they need it, so it's always a challenge for us communicating to potential clients that they're going to need our services.

"We work pretty hard on our relationships with our existing clients with all the advertising and marketing that we do, but the best way for us to generate new customers is through word of mouth."