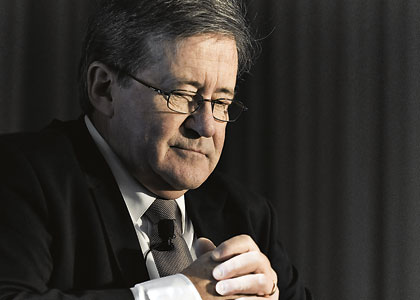 CHIEF Justice Wayne Martin may work in a world steeped in tradition but he is a reformer who speaks a language that most business people would understand – a desire for efficiency and a frustration with government duplication.

Speaking to a WA Business News Success & Leadership breakfast audience last week, the chief justice expressed concern regarding his lack of autonomy and he battled with the concept of parallel state-federal courts and laws, which he argued were unnecessary.

He believes that improving court efficiency is necessary to continue delivering justice and warned of the potential burden on the judicial system in the form of complex litigation resulting from massive projects in the state.

“Although a lot of people would see me as responsible for the delivery of justice in Western Australia, and I understand that view, I don’t actually have that authority to carry out that responsibility,” Mr Martin said.

“Because all the court officials, all of the court buildings and all the staff are under the supervision of the attorney-general.

“So I have no budget, I have no funding, I have no authority to incur expenditure, I can’t determine how money is going to be spent within the court system; all I can do is encourage government to do what I would like to be done.

“Any reasonable economist would tell you that separating responsibility from producing an outcome and the authority and capacity to deliver that outcome is a very bad thing; well that is what we have got in the courts of Western Australia.

“I have been promoting the idea that we should move to the South Australian model where the courts are in fact in control of their own destiny, responsible for their own expenditure.

“The previous (state) government supported that move and, I think, were on the brink of implementing that when they lost office.

“The present government has no enthusiasm for that sort of approach.”

When a new permanent attorney-general is appointed following Christian Porter stepping down, the chief justice said he would try to revive the policy change. “It will be an agenda item at our first meeting,” he said.

The chief justice sees this kind of control as simply better management as the workload increases.

“There will be increasing demands on us; especially with the scale of the project work that is occurring in WA and complexity of the litigation that is likely to emerge will increase,” he said.

“We have to have the capacity to respond to that in a timely and effective manner.

Although he is viewed as a reformer who has made significant changes to the state’s court system in his six-year reign, the chief justice believes it was a mistake to introduce a federal court, creating unnecessary duplication. “I think with the benefit of hindsight that the creation of the federal system was a mistake,” Mr Martin said.

He also points to the federal criminal code, about 10 years old, which taxes court time with interpretation when there were already existing codes in every state.

“Now, we as courts have to go through the whole process of construing and interpreting that new document, which is very bulky as Commonwealth legislation always is, and it is running alongside our existing code,” he said.

“I just don’t understand why we need these parallel systems quite frankly; it is very expensive and very inefficient.”