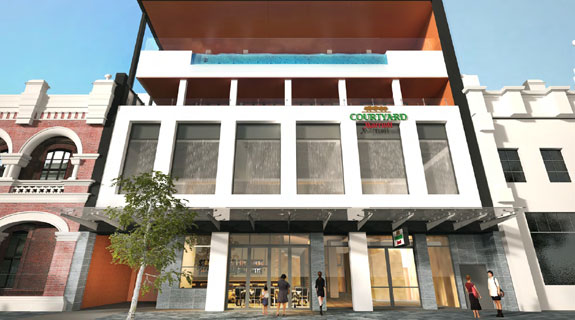 The Wellington Street Courtyard by Marriott will be the chain's first branded hotel in Perth.

International resorts chain Marriott is to become the latest major global player to put its name on a Perth hotel, with a Wellington Street proposal near Kings Square.

A 23-level, 332-room Courtyard by Marriott hotel at 609 Wellington Street has been recommended for approval by the City of Perth and will officially be assessed on Thursday.

According to City of Perth development assessment panel documents, the project will have a $47 million base construction cost.

The vacant site at 609 Wellington Street is owned by Singaporean group Roxy-Pacific Holdings, which bought the plot, formerly a Wilson car park, from fellow Singapore-based firm Crescendas Hospitality earlier this year, in a deal worth $17 million.

Along with 332 guest rooms across the 23 levels, the third floor of the hotel will contain a gymnasium, pool, bar and deck area, while a restaurant will take up space on the second floor.

While the 23 storeys are above the maximum height limits for the site, the size of the development is consistent with the City of Perth’s special residential design policy.

One of the conditions of the recommended approval is that the hotel be operated by an international renowned hotelier. The Marriott chain has not previously been in operation in Perth, but it is also the owner of the Ritz-Carlton brand of luxury hotels, one of which will be a flagship development at Elizabeth Quay.

The 204-room Perth Ritz-Carlton is scheduled to open in early 2018, with construction expected to begin in the latter half of this year.

The Westin Perth, located at 480 Hay Street near St Mary’s Cathedral, is expected to open in 2017.

There are also three DoubleTree by Hilton proposals in the works in Perth: an 18-storey, 241-room project at Barrack Square; a 150-room, eight-storey hotel on Point Street in Fremantle; and a 16-level, 206-room hotel on James Street in Northbridge.

Malaysia-based developer SKS Group is spending $190 million developing the three hotels, which are a more boutique offering under the Hilton Hotels umbrella.

There are 370 DoubleTree by Hilton hotels worldwide.