Marketing cause has an effect 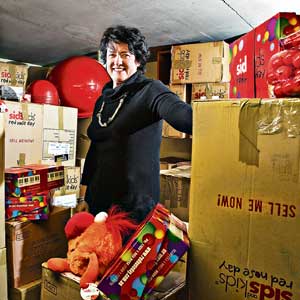 The campaigns, which often include merchandise fundraising programs, are gaining currency as a powerful positioning and marketing tool linking a company to a not-for-profit organisation in a corporate partnership.

CRM is a means by which companies can have a strong influence on consumers while making a social contribution and serving a business objective, utilising the power of the brand to publicly demonstrate a company's commitment to addressing charitable causes.

Commonly, businesses adopt a CRM program by donating a percentage of their sales to charity.

Every Easter Bakers Delight works in partnership with the Princess Margaret Hospital Foundation, donating $1 to the foundation for every six-pack of hot cross buns sold. The event raised $22,000 last year.

SIDS and Kids WA is linked with many businesses, including Mirrabooka Shopping Centre, ANZ, Progressive Supa IGA, Guardian Pharmacies and Target stores, which distribute its merchandise for Red Nose Day on June 26.

SIDS and Kids WA chief executive Shauna Gaebler said despite the tough economic times, many Western Australian businesses were putting their worries to the side and continuing to support local charities.

"Traditionally in a recession, people may be less inclined to give to charities, but although business might be slower and profits smaller than usual for many, numerous organisations have chosen to throw their support behind us anyway, which is extraordinary," Ms Gaebler said.

Kewdale-based Corporate Express has donated more than 750 hours of time packing Red Nose Day merchandise for this year's fundraiser, equating to thousands of dollars worth of wages.

While it's the fourth time the courier has lent a helping-hand to SIDS and Kids WA, the company said the global financial crisis hadn't stopped it involving staff to a greater degree than usual, through helping sell merchandise or offering counter space for fundraising items.

Acton Real Estate is also involved in SIDS and Kids WA's marketing campaign each year by donating the use of its rooftop billboard at the intersection of Hay and Thomas streets in Subiaco.

She said the charity, which created Red Nose Day in 1987, was one of the first in WA to roll-out a merchandise promotional campaign to spread the message about sudden infant death syndrome.

"It really was an innovative business model at the time, which myriad charities now use," Ms Taseff said.

"Our marketing budget is very small and most of our support is donated by companies and media organisations," she said.

The foundation's pink ribbon merchandise program had become one of the most recognised marketing campaigns in Australia.

"If we didn't sell the thousands of little pink ribbons that we sell every year, we wouldn't have the funds to support research," Ms Murray said.

The Smith Family said aligning a brand with a charitable organisation enabled a business to express its values, and in doing so helped it stand out from the competition.