There are plenty of ways to sustainably manage fishing without locking vast areas of ocean away. 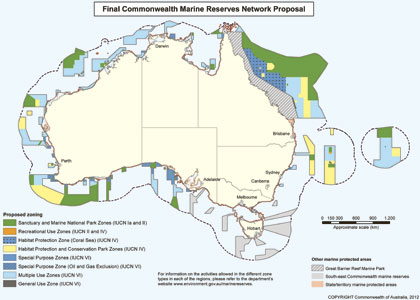 There are plenty of ways to sustainably manage fishing without locking vast areas of ocean away.

THE federal government’s move to stop fishing in a huge network of giant marine parks is not about preserving fish stocks; instead, it is about shoring up the green vote in inner-city electorates.

There is a lot of conjecture about the value of such sanctuaries in protecting fish species.

That debate is especially concerning when Australia intends to create in its economic exclusion zone 60 to 70 per cent of the world’s marine parks.

We already have 30 per cent of the world’s marine parks – that’s a lot of heavy lifting in conservation, especially when many people believe it is a wasted effort.

It is worth noting that Tasmania has done similar things with its land resources, preserving them in natural parks that are non-discriminatory when it comes to economic exploitation.

Tassie is an economic basket case propped up by the rest of Australia – by choice. Do we want to take the same step with our seas?

Exploitation doesn’t mean destruction. Fishing comes in all manner of shapes and sizes; wholesale banning means there is no way of taking advantage of existing or future opportunities in these regions via sustainable methods that might be available today or created in the future.

Arguments about food security are meaningless. Like the debate over coal seam gas, Australia can sustain itself by utilising a fraction of our seas and farmland. The ability to exploit our agricultural and fishing resources is to feed other nations.

This can be done in a way that is sustainable.

And the danger is not just that we damage our own economic interests; by banning sustainable fishing in parts of our resource-rich waters we simply risk the fishing moving to areas that don’t have the same governance standards we do.

In part, much of the concern within the community about falling fish stocks has been created by the dubious interpretation of statistics.

It is easy for the uninitiated to see a graph that shows a resource going from 100 per cent, or totally unexploited, to 20 or 30 per cent, as portraying something catastrophic.

But look at the science more objectively and you find that same graph tells a different story.

Depending on the type of fish, fisheries are often most economically sustainable at 20 to 30 per cent of their virgin stocks.

With much less competition between adults for food sources, they breed replacements more quickly.

Good fishery management is about getting this balance right so enough new fish are born each year to replace the previous cohort that found themselves in the net or on the end of a hook and, ultimately, on someone’s plate.

Good fishermen, working in the right regulatory environment, have the greatest interest in only taking as much as they can – sustainably.

Their livelihood and assets are dependent on finding fish next year and the year after, not just this season.

Certainly there are fishing practices that have other environmental consequences outside the amount of fish that are actually caught, but this can be managed without marine parks, which generally fail to cater for different methodologies.

That is a one-size-fits-all approach that ignores the broad-based nature of fishing as an industry and recreational activity.

And then there are ramifications for other industries that accidently are caught up in the net.

We seeing issues around resources development in Queensland because of shipping required to travel through the Great Barrier Reef. Ships and that Australian icon have had an on-again-off-again relationship since Captain James Cook first mapped it; and the reef has survived due to good management, not good luck.

Here in Western Australia there could be similar consequences.

Ships using the proposed port of Anketell and the expanding port of Cape Lambert may find their routes subject to a marine park or habitat protection zone, given the federal government has nominated those areas to the north and west.

Similarly, shipping proposing to use King Sound and the port of Derby might need to negotiate a marine park that appears to cover the whole entrance to this waterway.

Derby doesn’t do much as a port today but it might well be a coal export point and key supply base for nearby oil and gas rigs.

That is another issue around marine parks.

Fishermen point out that resources exploration is often allowed when fishing is banned, despite the risks being very different. But watch this space. The unfortunate episodes involving the Montara fire off the Kimberley and the much bigger disaster that struck in the Gulf of Mexico have put everyone on red alert, even though the industry has a pretty amazing safety record when you look at the amount of oil extracted and shipped over the past century.

Fishermen should not point to other industries’ good fortune; bringing down others as you fall is not a virtue.

They should argue the case based on the science that directly affects their own circumstances.

Fishing has been trodden over in this instance because it is a marginal industry that employs few people, often in remote areas.

The impact on these few in dollar terms, though, is immense. Fishing employs the most hardy and self-reliant types, often people who struggle to fit into standard employment. Aren’t they allowed to have jobs too?

Their catch is a big export earner for the country, it underwrites our green credentials in brands on supermarket shelves everywhere and it is on the front-line when it comes to keeping an eye on our long and distant borders, hundreds of kilometres out to sea.

Just because we are all bloated from consuming the wealth of the mining boom doesn’t mean we don’t need alternative industries. We are not so rich we can afford the luxury of discarding a sector of the economy that is, by itself, quite sustainable.

What I find most objectionable from all this is that the main voice in the conservation movement demanding Australia adopt marine parks is the Pew Foundation, a US group that has exported its brand of environmentalism here because democracies are more vulnerable to this kind of thinking than plenty of other places that really need to protect their resources.