Marina to proceed, despite alleged discovery

The state government has confirmed that it intends to proceed with clearing at the new $126.5 million Ocean Reef Marina, despite claims it is home to a significant indigenous site. 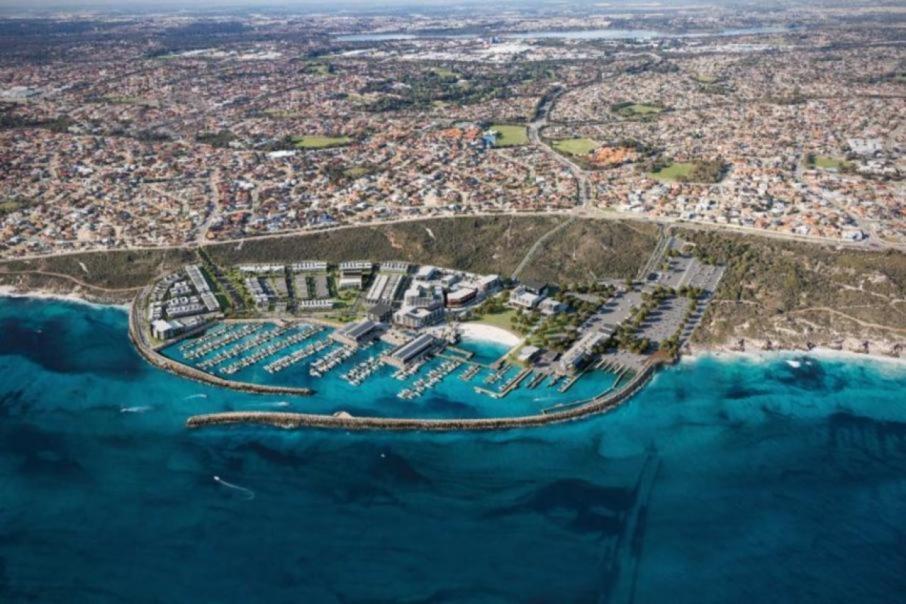 The 2km breakwaters at Ocean Reef Marina will be the longest in WA. Image: WA Government

The state government has confirmed that it intends to proceed with clearing at the site of its new $126.5 million Ocean Reef Marina, despite a community lobby group having allegedly discovered gnamma holes and artefacts.

The Save Ocean Reef Citizens Association, which has been lobbying against the project on environmental grounds, called the credibility of the state’s indigenous heritage assessment into question after it became aware of gnamma holes on a limestone ridge in the clearance area in November last year; historically a major source of freshwater for indigenous people.

Association member and experienced geologist and micropaleontologist, Marjorie Anthorpe, allegedly discovered tools to the north of and within the development site. And last month, a local traditional landowner uncovered a flat stone at the site they believe would have been used for cleaning kangaroo hides.

But Aboriginal Affairs Minister Ben Wyatt said he believed the move to be politically-motivated, and said it was disappointing to see people using Aboriginal cultural heritage to halt developments they oppose.

He said that the state government had undertaken extensive work to identify whether Aboriginal cultural heritage sites were present within the development area and was confident in the investigations that had taken place, with reports and consultation with aboriginal stakeholders confirming no further approvals were required from state or federal heritage consent authorities.

“DevelopmentWA is working closely with Yunga and Aboriginal Elders to influence design outcomes, understand and represent the cultural history and narrative of Ocean Reef, and to identify Aboriginal economic and employment development opportunities through the Project,” he said.

“As such, and given the significance of the project within Western Australia, the State intends to continue to progress works on site.

“It is disappointing when people use Aboriginal cultural heritage in politically-motivated attempts to try to halt works on developments they oppose on unrelated ideological grounds.”

Last week, the law firm engaged by the association wrote to DevelopmentWA outlining its concerns with the initial heritage assessment and calling for clearing and construction preparation works to cease to allow for further investigation.

In the letter, obtained by Business News, Hammond Legal lawyer Daniel McCarthy outlined that the association believed the permitted clearing area contained significant indigenous heritage sites and artefacts that had not been “sufficiently considered” before the works were authorised, and that it considered the initial indigenous heritage assessment undertaken by DevelopmentWA’s contractor Strategen-JBS&G to be “flawed”.

According to Strategen’s Environmental Assessment and Management Strategy Report, five Aboriginal heritage surveys had been undertaken at the site, none of which identified any registered heritage sites within the confines of the Ocean Reef Marina site.

The company reported that the closest registered Aboriginal site was located about one kilometre south of the subject site and the potential for sub-surface Aboriginal or historical archaeological sites was deemed to be low.

In a survey undertaken in 2015, the Archaeological and Heritage Management Services stated that work should cease immediately if any suspected Aboriginal or historical archaeological objects or sites were to be found during development and a suitably qualified archaeologist engaged.

Mr McCarthy said his client considered that DevelopmentWA had now been put on notice, indicating that its failure to stop works and investigate the heritage sites could prompt legal proceedings.

Save Ocean Reef Citizens Association executive committee member Elizabeth Re said it was very worrying that the state had chosen to ignore the discovery and called for greater transparency, having asked for but not received the initial report on the investigation of heritage sites.

“We [The Save Ocean Reef Citizens Association] have asked for the initial report on the investigation of inidgenous heritage sites of significance, but we cannot get it,” she said.

“Where is the accountability and transparency?

“I think the primary issue is that in supporting the development, the state government, DevelopmentWA and the City of Joondalup have failed to adequately support, value and protect indigenous heritage, and the flora and fauna at the site.

“I think it’s very worrying that they’ve chosen to ignore this latest discovery.”

The marina development has been considered for the better half of a century, but is now set to become a reality. It is planned to include Perth's first ocean pool,12,000 square metres of retail and commercial spaces, 550 boat pens, 320 trailer parking bays, a youth plaza, an ocean-themed playground, a waterfront promenade, food and beverage businesses and residential development.

The development requires the clearance of almost 30 hectares of vegetation.