Surfing has long been an economic driver to the Margaret River region, but the sport’s impact is increasing further due to the status of the Drug Aware Margaret River Pro. 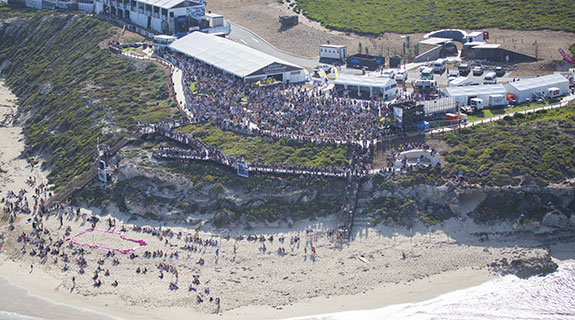 Surfing has long been an economic driver to the Margaret River region, but the sport’s impact is increasing further due to the status of the Drug Aware Margaret River Pro.

The event is credited with bringing more than $4 million in visitor spending to the region last year.

Surfing WA chief executive Mark Lane told Business News the event had been elevated to world tour status last year after the combined efforts of the state government, Surfing WA and the Augusta Margaret River shire, and lobbying by the Association of Surfing Professionals.

This year will be the second time the Margaret River Pro has been a leg of the World Championship Tour.

To help ensure the event’s ongoing success, the state government (through Royalties for Regions) and federal government provided funding for a $6 million upgrade to facilities at Surfers Point, which was completed last year.

Mr Lane said it took two years of preliminary work and 18 months of negotiation to secure one of the 11 men’s events and 10 women’s events on the world tour.

“Persistence paid off, our approach was rejected twice but we just didn’t take no for an answer,” Mr Lane said.

“It’s such a valuable asset to have a global licence to run one of these events, it’s sort of like the tennis grand slam or car racing’s F1, this is surfing’s equivalent.”

World Championship Tour status has resulted in greater international exposure for the two-week event in April, which guarantees the top male and female professional surfers, including Yallingup local Taj Burrow, will compete.

Being part of the championship tour has also increased the event’s tourism appeal.

The Margaret River Pro is in the running for the Australian Tourism Awards after winning last year’s WA tourism awards in the major festivals and events category.

The event, which attracts about 30,000 people, has been directly linked to visitors from outside the region spending $4.4 million in during 2014.

“In terms of worldwide exposure for the Margaret River region, the surf pro is massive,” he said.