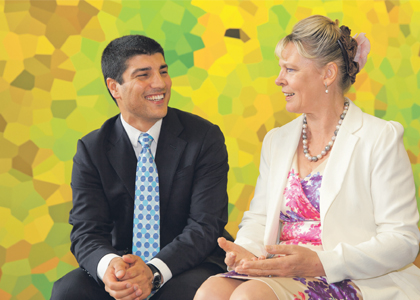 A NATIONAL microfinance group has announced plans to expand its presence in Western Australia following the receipt of a $300,000 grant from the state government.

Many Rivers Microfinance -which lends money and offers financial advice to those unable to raise capital from traditional lenders - received the grant as part of the first round of the state government’s $10 million Social Enterprise Fund.

At the same event, the not-for-profit group launched a new evaluation framework, developed for it by Deloitte Access Economics.

The new reporting framework will measure the effectiveness of Many Rivers Microfinance’s work through 67 social and economic indicators and provide it with a report card, rather than a single figure analysis, according to Deloitte Access Economics partner Ian Harper.

The reporting framework will examine clients for the first five years of their business’s life to track the long-term success of the program.

“Having a framework developed by an independent organisation will allow us to really measure the social and economic impacts for our clients,” Many Rivers.

“It adds a lot of integrity to our work and it also adds a lot of transparency.” He said the state government grant would be used for expansion in the Goldfields, enabling Many Rivers to work from Kalgoorlie to Esperance.

“It’s also going to help us expand into the East Kimberley; it’s going to allow us to work more broadly into Halls Creek and Wyndham from our Kununurra office,” Mr Bagheri said.

Part of the $300,000 will be used to establish a second field officer in Kununurra to improve outreach in nearby areas.

Aside from state government funding, Many Rivers is about to open its sixth WA office, in Broome, early next year.

“Support to expand into Broome has come from Woodside and from a traditional owners’ group there called the Waardi organisation,” Mr Bagheri said.

“The two organisations are going through the process of signing contracts and we will be appointing someone in the New Year to get started on the project.”

Mr Bagheri said Many Rivers provided its services for marginalised people with a capacity or financial exclusion issue.

Mr Bagheri said Many Rivers has a loan repayment rate of 90 per cent for the $1.3 million in loans awarded over the past five years.

These loans have resulted in the start-up of 200 businesses, 70 per cent of which are still in business after their first year.

Many Rivers started in New South Wales and currently has 15 offices in WA, NSW and Queensland.