Two local businesses are proving that manufacturing still has a future in Western Australia, with quality and reliability providing an edge in two very different markets. 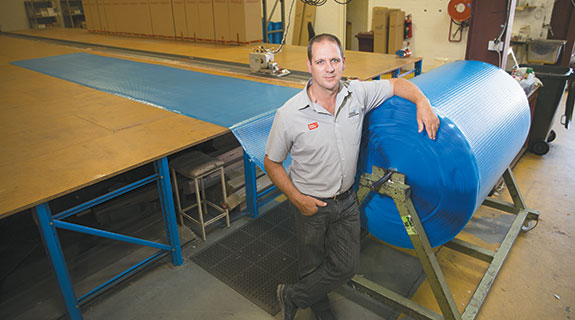 HIGH TIDE: Derek Prince says much of Daisy’s success is due to its quality and reliability. Photo: Attila Csaszar

Two local businesses are proving that manufacturing still has a future in Western Australia, with quality and reliability providing an edge in two very different markets.

Both Welshpool-based Daisy Pool Covers and Rollers, and Malaga business Photosnap have manufacturing operations in Perth, and have managed to find international markets for their products.

Daisy uses overseas suppliers for some smaller components, but manufactures the bulk of its covers and rollers in WA.

Managing director Derek Prince says there are more than 1 million in-ground pools in Australia, with an additional 25,000 installed every year.

About 20 per cent of those pools use covers.

“We’re essentially a supply chain management style business where someone places an order, we custom make it at dispatch it the next working day,” Mr Prince said.

The company, which has sales in the order of $10 million annually, also has a manufacturing operation in Sydney, giving it a competitive presence on the east coast.

Mr Prince has worked at Daisy since 1997, when his father ran the business.

He and his brother bought out his father’s share of the business in 2010, and the company is now taking its product overseas.

“I export to a number of different countries around the world,” Mr Prince said, with destinations including South Africa and Spain.

Mr Prince said that, in the long run, producing a high-quality product was a more sustainable business model.

“We’ve built the market on quality,” he said.

Mr Prince said the product lasted significantly longer than imported alternatives, and many consumers who had switched to imported brands would generally return to locally made products fairly quickly.

Consequently, import penetration in the domestic pool cover market is very low, he said, because those products generally didn’t last as long. The business says this decision has led to increased customer loyalty and recognition of its service quality in the 2015 Asia-Pacific business excellence awards.

The decision to commit to an Australian-made product was cemented five years ago when Perth businessmen Jason D’Costa and Troy Marley joined forces.

The founding partners of Photosnap drew on Mr D’Costa’s early success in leasing one photo booth, and Mr Marley’s skills learned from his business operating and rebuilding arcade machines.

They now have eight staff, mostly former cabinet makers, in their 375 square metre manufacturing warehouse and have built and either leased or sold more than 300 photo booths in Australia and New Zealand.

Mr D’Costa told Business News his customers appreciated the business’s decision to keep things local because Photosnap worked with them to customise services that gave them returns on their investment, such as corporate branding on pictures that could be printed as well as shared on social media.

“Absolutely our venues see a lot of benefits, and in terms of quality there’s a vast difference,” Mr D’Costa said.

“As we develop, particularly in terms of our software offering, we can really break into new markets.

“We’re pushing booths to venues so venues can leverage off a profitable piece of equipment to convert more sales or to have a point of difference from other venues.”

He said the business had never been tempted to shave costs by offshoring major work, even choosing to source its own supplies locally.

“We source Canon DSLR cameras from the Good Guys in Malaga, we use Mitsubishi dye sublimation printers from our supplier on the Gold Coast, we use an Australian supplier for our touch screens who’s in Melbourne, and the cabinetry is sourced from a Perth supplier Worldwide Timber Traders,” Mr D’Costa said.

“It’s not all about the dollars at the end of the day, it’s more about our business helping clients realise their goals.”