Having won a big victory at the state election, Premier Colin Barnett is looking to widen his influence, within Western Australia and elsewhere. 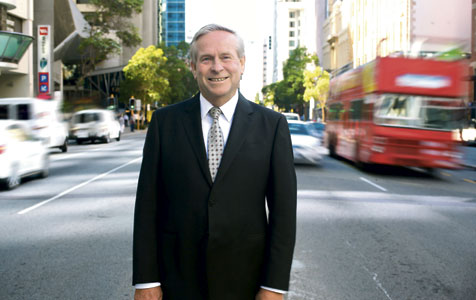 Having won a big victory at the state election, Premier Colin Barnett is looking to widen his influence, within Western Australia and elsewhere.

ONE of the key moments during the state election campaign was Labor’s early, ill-judged decision to play the man, with its talk of Colin Barnett being old, unwell, and planning to hand over to Troy Buswell.

The electorate didn’t buy it, and anyone who has met Mr Barnett recently wouldn’t have a bar of it.

The premier has a spring in his step and is expansive about the areas he wants to influence; not just policy in Western Australia but nationally, and even internationally.

He has been buoyed by the strength of his electoral victory, saying most people fail to appreciate the scale of the win.

The Liberals and Nationals attracted 58 per cent of the vote, the largest two-party preferred result in nearly 100 years.

“This is the biggest endorsement of a government in Western Australian history,” Mr Barnett told Business News.

“I interpret that as a strong mandate for the very proactive position this government has taken on encouraging business, mining, resources, and changes to the City of Perth in particular.”

Mr Barnett emphasised that he wanted ministers to pursue their roles with vigour.

“The role of premiers and ministers is to make decisions; we’ve got a mandate and we’ll get out now and make decisions,” he said.

“I want all ministers to drive the agenda quite hard.”

The first big change since the election was the appointment of five new ministers.

“The next major change will be in the structure of government departments. It won’t be radical but it will be significant.”

The premier was seen as the dominating influence during the government’s first term, and he intends to take an even broader role during the next four years.

“I’ve been a little bit frustrated; a lot of the day-to-day management of government falls into this office,” Mr Barnett said.

“I was feeling towards the end (of the last term) that I wanted to get back to directing the policy flow across all portfolios.

“And like anyone, I’ve learned a lot; as premier, I’ve had to deal with ministers across every portfolio.

“I’m not taking the role away from ministers, but simply being more hands-on in policy work.”

There certainly is no shortage of major issues facing the premier.

These include the ongoing battle with Canberra over WA’s share of GST proceeds and the uphill task to secure federal funding for the big infrastructure projects he promised during the election campaign.

Closer to home, there will be inevitable tension with the Nationals over the distribution of Royalties for Regions funding.

Mr Barnett has already signalled that he wants a shift away from ‘beautification’ projects towards basic town infrastructure.

There is also the prospect of a slowdown in construction spending on big resources projects, which has been the major driver of WA’s economic growth.

This spending is expected to peak in the next couple of years, though Mr Barnett insists there is still plenty to come on projects such as Gorgon, Wheatstone and Roy Hill.

Having said that, Mr Barnett emphasises the need to diversify the state economy.

“In our second term, I see the prime task across government as broadening the economy; and that’s not stepping back from mining or petroleum at all, but realising I have a little more time now to help in areas like science, agriculture, education,” he said.

Another challenge facing the government is the emerging trend towards floating LNG developments.

Shell made history two years ago when it announced the go-ahead for its $12 billion Prelude development, which was touted as the world’s first FLNG project.

Now there is a fast-growing list of prospective FLNG projects targeting gas fields off the WA coast (see listing, above).

The latest addition to the list is ExxonMobil’s Scarborough development, located 220 kilometres north-west of Onslow.

Exxon has sought environmental approval for the Scarborough FLNG development, which would produce between 6 million tonnes and 7mt of gas per year.

The big attraction of FLNG is that the construction cost is lower than for an equivalent onshore LNG plant.

It is particularly suitable for ‘stranded’ gas assets that are either too small or too distant to justify an onshore LNG plant.

Mr Barnett seems amenable to Scarborough being developed as a FLNG plant, since there are already ‘onshore’ LNG plants on the Burrup, on Barrow Island and at Onslow, to service gas fields in the Carnarvon Basin.

“Scarborough is a large resource but it’s a long way off the coast and I can accept that could be floating,” Mr Barnett said.

“Its just one field, and we’ve already got onshore facilities there that will probably expand, so we’ve got a balance there and that’s fine.”

But the most pointed question is what to do with Woodside’s Browse gas project – build an onshore plant at James Price Point near Broome, potentially at a cost of $40 billion, or opt for a lower-cost floating LNG plant?

Mr Barnett said the Browse basin, off the Kimberley coast, was different.

“I can accept some of that gas, comparatively small fields like Prelude, being floating,” he said.

“But for Australia it would be a missed opportunity, a travesty if we did not bring at least some of that gas onshore to provide opportunities for local industry in construction, operation, maintenance and the like, and also to bring gas into the domestic market.

“We would be foolish as a country, and would be seen to be foolish, if we allowed all of the gas in the Browse basin to be developed as floating, to have the platform built offshore, brought in, tied up, and all the oil and all of the gas going offshore.”

Mr Barnett intends to inject himself into the national debate over energy policy, particularly advocating wider use of a domestic gas reservation policy.

“There is talk about a shortage of gas on the east coast but they haven’t even done anything about gas reservation for coal-seam gas,” he said.

“We’ve got all of the Ichthys gas going offshore out of Darwin, yet there is a shortage of gas for Alcoa’s Gove project.

“What are we doing as a country?

“I’m going to saying a little bit over the next few weeks about energy policy, of the lack of it.

“We are just foolish as a country.”

Mr Barnett strongly defends his interventionist stance on the Browse project, saying WA has a direct commercial interest in how the project develops.

“I have to wear two hats; I’ve got the government role and I’ve also got a direct commercial interest as the premier of the state that owns a third of that resource, and a commercial interest in seeing it come ashore to supply our utilities and hopefully bring gas prices down,” Mr Barnett said.

When asked about his federal Liberal colleagues, and others, who say the development decision should be left to private industry, he says pointedly: “How many projects have they ever got off the ground?”

“I think the state government can do a lot in getting secure long-term markets for our industry. Often that is achieved at a government-to-government level, and maybe industry doesn’t understand that,” he said.

Mr Barnett is well known for his regular visits to China and Japan, often in support of iron ore and gas exports, but he is looking to agriculture as another area where he can contribute.

Specifically, he is looking to lift live animal exports to Saudi Arabia.

“We’re going to see what we can do as a state independently with Saudi,” Mr Barnett said.

“We’re going to try and build a relationship between Saudi Arabia and Western Australia, and then we will take on the federal government.”

Mr Barnett believes the next few years will be filled with opportunity.

“People talk about the Asian century but this is the Asian decade. This is the decade where the big growth is occurring,” he said.